Sol inspiration is my Aivazovsky

personal collection philately numismatics procardia personalities
This year, 17 (29 articles) July marks 203 years since the birth of the marine painter Ivan Konstantinovich Aivazovsky. Today some people prefer extravagant abstract art Picasso, I caress your soul classic seascapes. Maybe the secret is that the sea is my big love? It is the air I breathed in childhood, with its waves shared their first girlish secrets, were yielded to his embrace, and I continue to love this gentle blue azure... 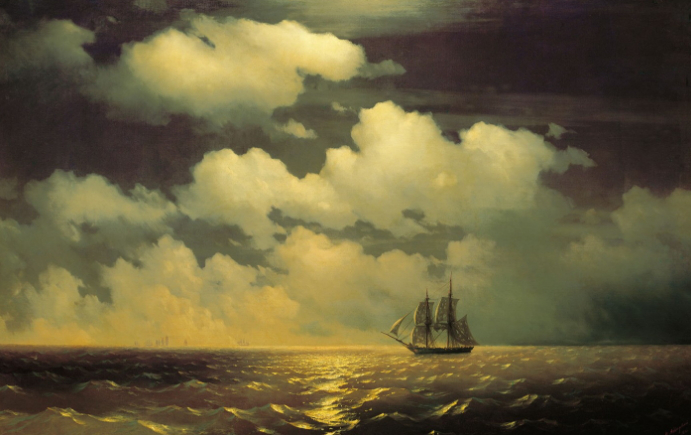 Amazing. Unique. Charming. What other adjectives can describe the paintings of the Great masters? To realize his unearthly talent, it is enough to look at the picture - You will feel the light and the breath of the sea, hear the cry of gulls and the noise of the rolling waves. Even if You personally never seen the sea, after of paintings will feel like a seasoned sea wolf. Gentle, caressing the soul of the summer calm or seething, deadly waves of the 'Ninth wave' - all this lives its own life in the paintings of Aivazovsky. And you feel like in the center of it. 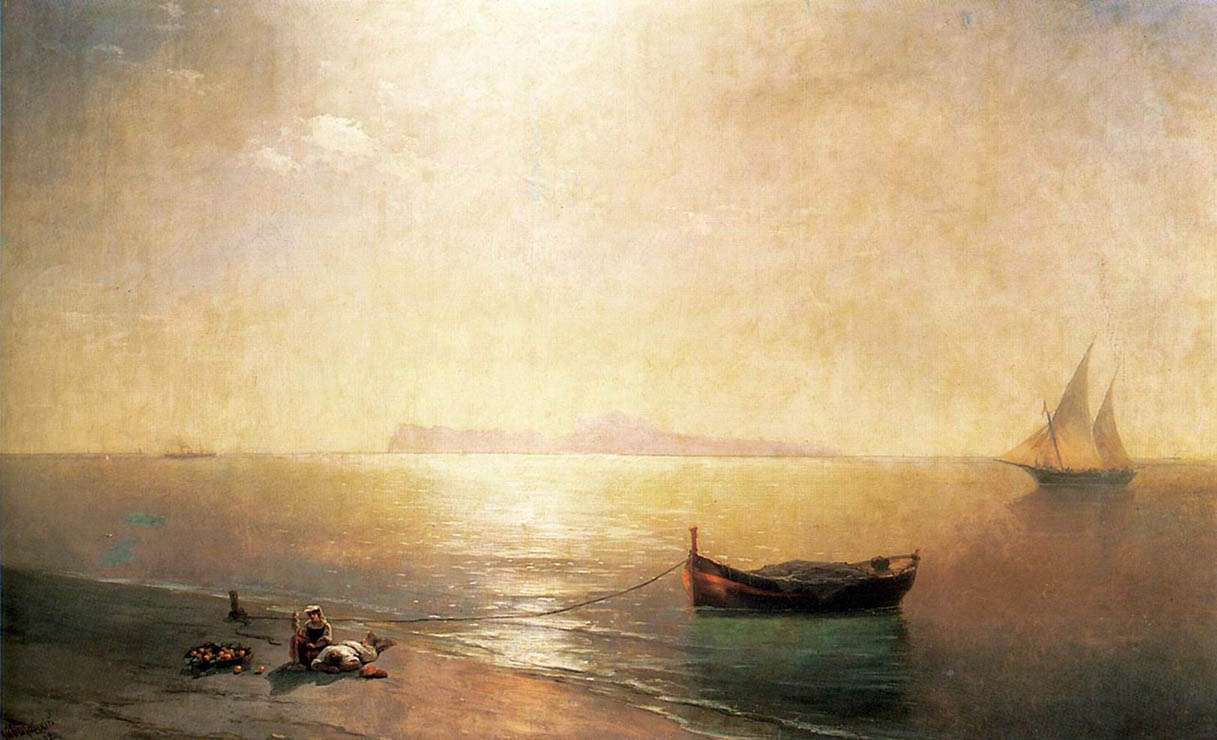 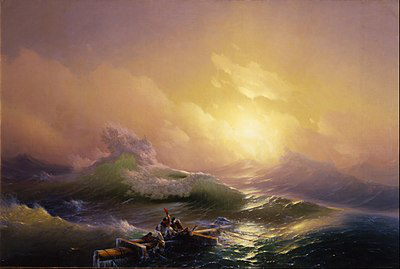 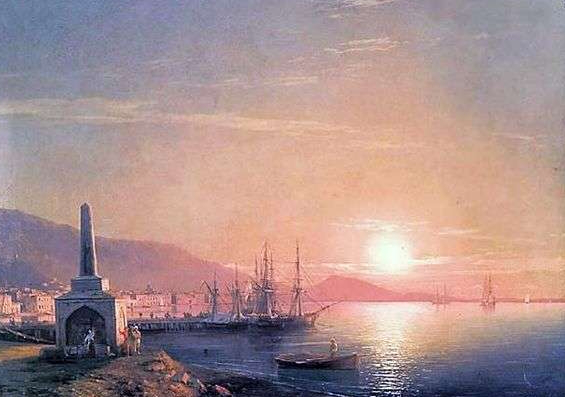 The true heart of the artist's life belonged to the city where he was born and raised - on the Sunny Feodosia. There he waited for the first success - the mayor treasurers have taken 'under the wing' talented boy. Having been Simferopol and Saint Petersburg, where young talent has absorbed all the subtleties of artistic skill.
Aivazovsky had a chance to see Europe, Asia Minor and the Caucasus, however, the native Feodosia to forget he could not. An artist built the mansion now converted into a national Feodosia art gallery them. Aivazovsky, where are exhibited the best works of the master.
I was lucky enough to visit the house where he lived and worked Ivan Konstantinovich. The room is laced with unusual and magical light pouring down from above. Maybe that's why in all the paintings of Aivazovsky, you can observe fascinating and believable game world. 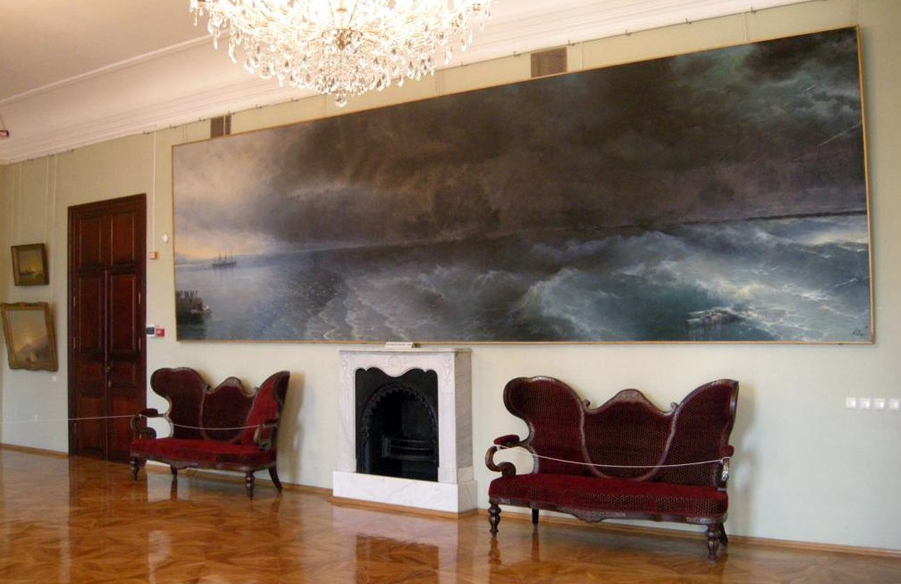 They say that when they were exposed to his famous work 'View of Odessa on a moonlit night', the astonished visitors looked for the frame, thinking that there are backlight! So naturalistic looks of the night sea on canvas. 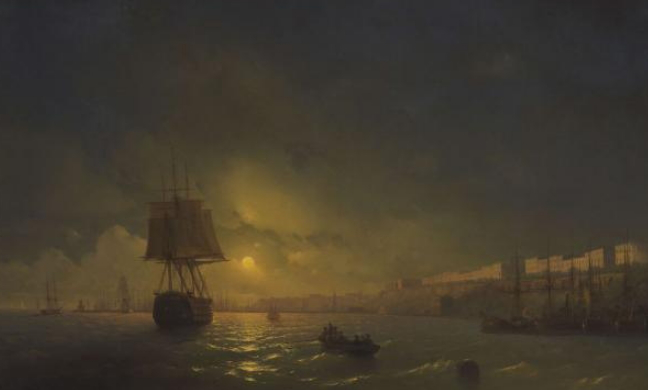 Of course, in my painting collection has stamps with reproductions of paintings.

Painting country :
Year :
Author :
Style :
Genre :
Topic :
Technique :
Go to the collection
Looking at them, I admire the magic brush Wizard, you can watch endlessly on his 'St. George monastery' and 'battle of Chesma'.
To the fiftieth anniversary of his death in 1950, mail USSR released a commemorative series of stamps. 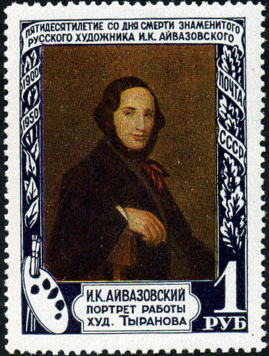 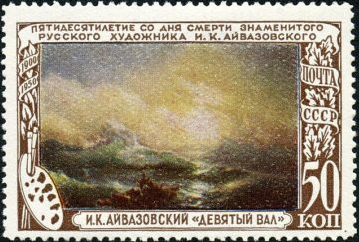 Is the name of Aivazovsky, among the paintings of the State Tretyakov gallery. In 1967 he published a series of stamps, one of which shows a picture of a 'Sea shore', written in 1840.
The 200th anniversary of the birth of Russia released a souvenir sheet. It depicts a portrait of the artist in middle age, who stands, leaning on the easel. A little tired, but infinitely inspirational creative process Aivazovsky exudes radiant calm and light, like his painting 'the Entrance to Sevastopol Bay'. 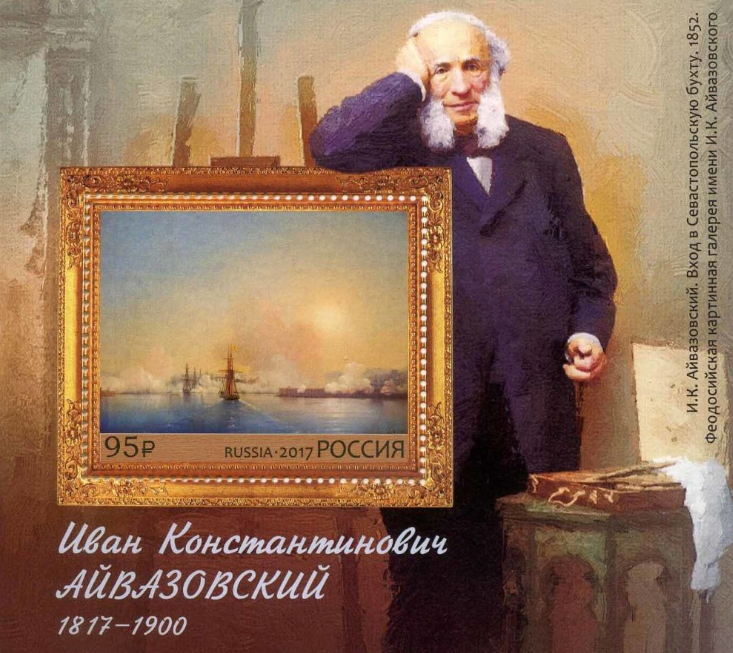 Numismatics is also not left behind. In commemoration of the 200th anniversary of the birth of Aivazovsky (as for me, the date is much nicer than the 50th anniversary of his death), the Bank of Russia had issued a silver commemorative coin in denomination of 2 rubles. The method of minting - proof, silver was taken 925. Circulation is 3 thousand copies.
The memory of the great Armenian in Armenia in 2006 released gift coin 100 drams. It is coined of silver and placed in a plastic case.
And the 200th anniversary Bank of Armenia put into circulation 1000 gold coins, minted by the mint of Lithuania. The obverse has the famous painting of the artist - of course, 'the Ninth wave'. On the reverse, as usual, the portrait of Aivazovsky. The deltiologists will be interesting themed set of postcards 1968 and memorable set of the Leningrad publishing house 'Aurora', as well as numerous sets and naborchiki.
Special attention deserves a vintage postcard Dating from the first decade of the twentieth century, which depicts Aivazovsky painting 'Fishing pier'. 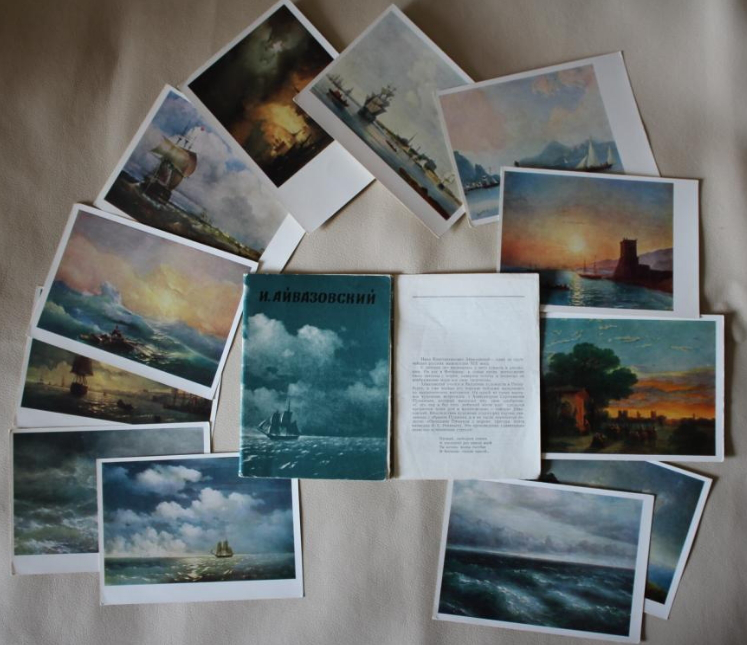 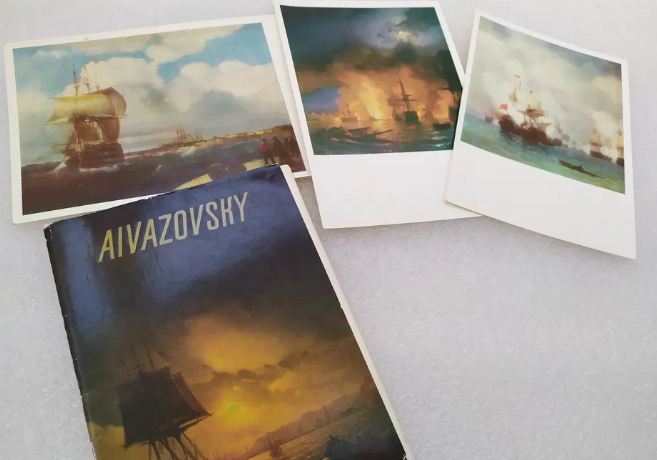 Ivan Aivazovsky lived a long, happy life. Dead master in her sleep at the age of 82 years. Of course, you can refer to his marriage with a young Anna Burnazyan (he was 65, she was 25), to the dislike of the artist reading (as he wrote visited him in 1888 Chekhov, 'in his life he did not read any books'). However, his legacy of 6 thousand greatest paintings allows to classify Aivazovsky one of those people who is 'the salt of the earth', without whom the history of mankind is not complete.
The epitaph on his tombstone only one line covers the whole life Aivazovsky: 'Born a mortal, left an immortal memory'. I only need to open your album or log in to personal account HOBBYKEEPER ONLINEagain to see exciting soul seascapes in the paintings of Aivazovsky. And feel the sea breeze, the salty air of the coast and the noise of the endless element.
Irina I.
Translated by Yandex.Translator