'Our banner of victory, our Stalin!'

philately history
The historical period of time when the sole power in the Country of the Soviets belonged to one person, known as Stalin, is both vivid and tragic at the same time. Stalin concentrated executive and legislative power in his hands, and during 1922-1953 he was the sole ruler of the USSR. At this stage, the country was waiting for brilliant achievements in the development of science and technology, in particular airship construction and Arctic exploration. But the Soviet reality carried not only a flaming banner of victory. There was also a reverse side of the coin in the form of the GULAG, the 'Great Terror' and the 'Great Famine'...
What was wrong with Iosif Dzhugashvili, and why is his name associated today with both the Victory over fascism and the bloodiest crimes against humanity? 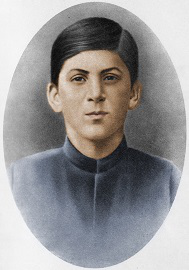 In philately, there is a whole section devoted to everything related to the personality of Joseph Stalin ‒ Stalinian. It is clear that the lion's share in it falls on postage stamps issued in the USSR. Then there is the PRC ('Stalin and Mao are listening to us'), as well as Albania, in which the National hero Enver Hoxha, until 1985, called on the population to merciless class struggle 'in the name of the genius, father and savior Stalin'. 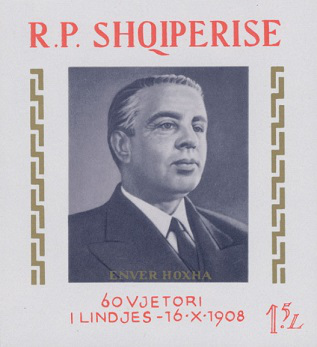 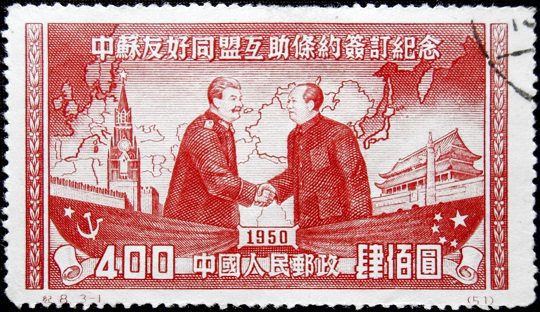 Even the leader of the world proletariat, Lenin, had a tradition-not to put images of living leaders of the state on stamps. But how could the Soviet post office ignore the Great Leader and Father of Peoples?! Therefore, postage stamps are put into circulation, on which there are not openly sycophantic portraits, but plot pictures containing the image of Stalin.
The first such stamp is a stamp dedicated to the 10th anniversary of Lenin's death. It was published in 1934, and the harsh profiles of the two world leaders are depicted on it against a blood-red background of revolutionary banners and the agitated workers 'and peasants' masses. 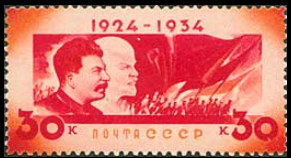 The most 'cool' in this regard is a block consisting of 4 non-perforated stamps, and dedicated to the 70th anniversary of Stalin. It was released in a limited edition, and was included in the USSR in a hundred philatelic copies, the export of which abroad was prosecuted by law with imprisonment.
The stamps by the hand of the artist Comrade Zhitkov in a gold frame depict Stalin and Lenin in Smolny and Gorki, as well as a personal portrait of the Secretary General. To date, the block is the largest postal block issued on the territory of the former Union: its dimensions reach 175 by 220 cm. 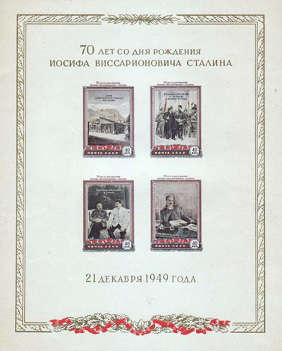 However, the most rare in its rarity is one of the last postage stamps dedicated to Joseph Stalin. It was released the year after the death of the leader, in 1954, and was dedicated to the 75th anniversary of his birth. 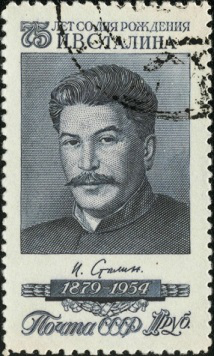 Experiencing a huge ideological pressure, the Soviet post office first printed a trial toothless sample. It was he who was presented in the glue-free version in the governing bodies, and it was on him that the standard commemorative stamps dedicated to Stalin were printed in the future. The auction price of such a rare sample today is expressed in six figures. 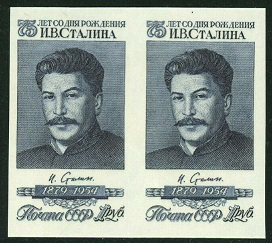 In the light of subsequent events related to the de-Stalinization and debunking of the cult of personality, stamps with images of Stalin were not issued in the Soviet state. Nowadays, timid attempts to issue postage stamps even with the image of the three leaders of the winning countries, participants of the Yalta Conference, were met with hostility by the world community, who saw in it an attempt to return to Soviet times.
However, for real collectors, the taboo of interesting topics does not matter at all. Today, Staliniana occupies a worthy place among other philatelic themes as a symbol of a bygone era. After all, it is characterized by the achievements and exploits of ordinary people who went into battle and built cities in the deserts under the motto ' For the Motherland! For Stalin!'. So is it worth erasing from the memory the feat of an entire nation because of one person who imagines himself to be God?..

Create and add instances of brands, coins, postcards, banknotes, pictures on any topic together with the program HOBBYKEEPER ONLINE. The service allows you to quickly find interesting and sensational novelties, saving them in your online cabinet, communicate with collectors from all over the world, study in detail the materials of your own and other people's collections, if you want to show your collection on social networks.
Join us, and the inaccessible will become available, and the impossible will become possible together with the Keeper Hobby!
Translated by Yandex.Translator