numismatics philately procardia bonistics cities
A brilliant, unique, luxurious and intriguing metropolis has become the dream of thousands of tourists and hunters of millions. 'Big Apple' -new York - beckons with its brilliance and the illusion of an easy life.
Many people associate it with huge skyscrapers, the incessant bustle of business life, luxury mansions, expensive shops. Is new York as magnificent in everyday life as its magnificent facade? Or is it just a gloss, a gold dust, vainly exalted by writers, Directors, collectors?

To understand the phenomenon of new York, you need to understand how a small European settlement on the territory of the Manahattoo and Canarsie Indian tribes turned into New York.
Let's turn to its history. The Americans took possession of the city in 1783 during the War of independence from great Britain. New York's strategic location on the East coast of the American continent made it the center of major events that took place in the young American state. In 1789, the first President of the country is inaugurated in the capital of the United States. 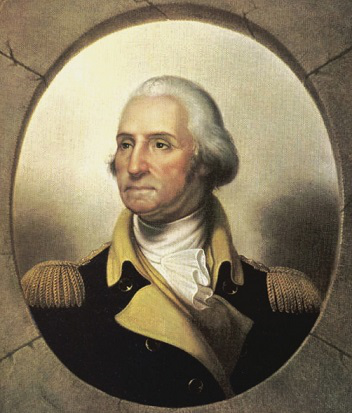 Numerous coins are dedicated to George Washington, and his image adorns the well-known us 1 dollar bill.

art Collectors will be interested to know that this portrait of the first President was painted from life by the artist Gilbert Stewart, to whom Washington posed several times in 1795. It is placed in a mirror image on the currency sign. 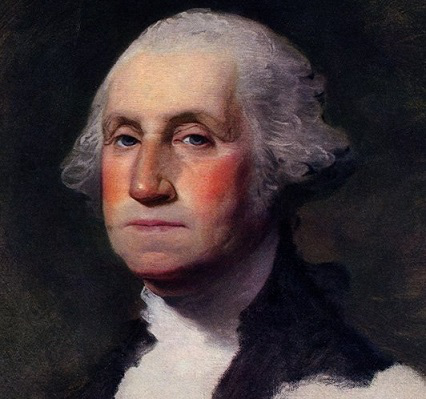 The beginning of the twentieth century is considered the starting point from which the United States began to increase its financial potential. This is partly due to the launch of the famous new York stock exchange, which today is one of the most influential financial institutions in the world. 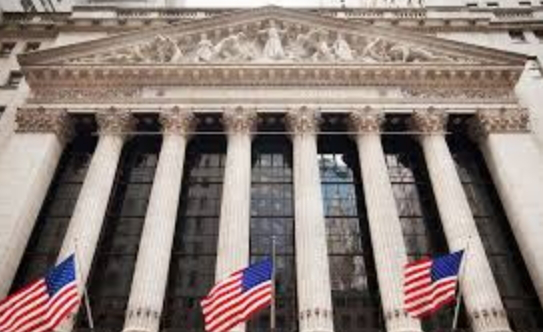 In 2017, the legendary Exchange turned 200 years old. To commemorate this event, many countries have issued commemorative copies of collectible coins. The Polish mint minted 999 silver coins with a face value of 1000 francs for the Republic of Cameroon.
On the reverse is an image of the symbol of the new York stock exchange-an attacking bull that brings success and wealth to its owners. The feature of the product is the ability to fluoresce in the dark, as you can see for yourself by purchasing a coin for your collection. 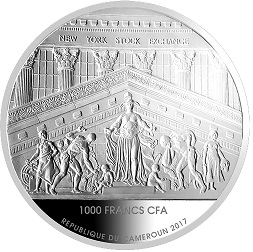 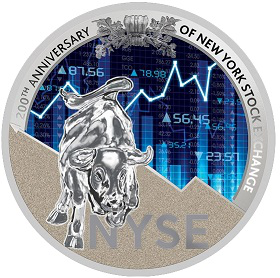 From the middle of the NINETEENTH century, immigrants from the starving Old world-Ireland, Italy, and great Britain - began to flock to new York. Let's not forget about the racial discrimination of the black population of the southern States, which is also beginning to arrive EN masse in new York in search of a better life.
At the peak of immigration in 1886, the famous statue of Liberty was erected on a small island near Manhattan, symbolizing democracy and freedom - such desirable categories for millions of people in the world. The United States issued a $ 25 platinum coin in honor of its legendary symbol. Moreover, it contains 7.78 g of pure precious metal. 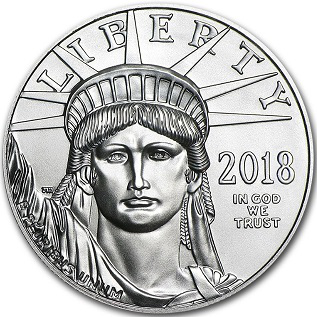 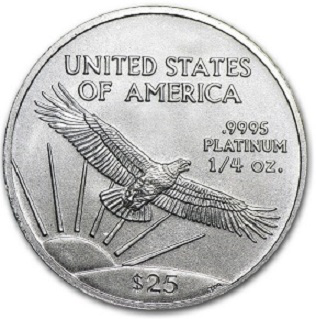 The cook Islands introduced 1,886 silver coins dedicated to Lady Liberty in 2020. Coinage was produced by 'CIT', quality - ' Blak Proof' with selective coloring on both sides. The coin value is $ 5. 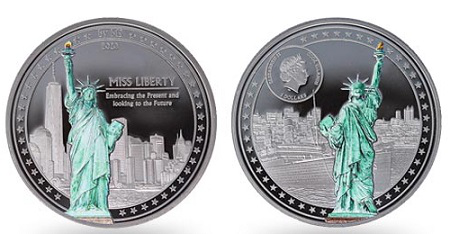 In the gold version, the famous statue is depicted on a us coin Dating back to 1986. It was released in the million-dollar edition of the 'Commemorative Coins' series, and was minted at the United States Mint at West point. 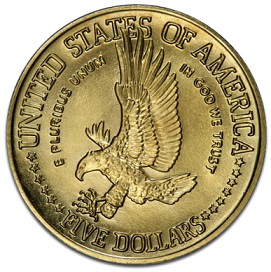 A 'Vintage new York postcard' by Karen Arnold is also dedicated to the statue of Liberty. It comes with a postage stamp that shows the recognizable landscape of the metropolis. 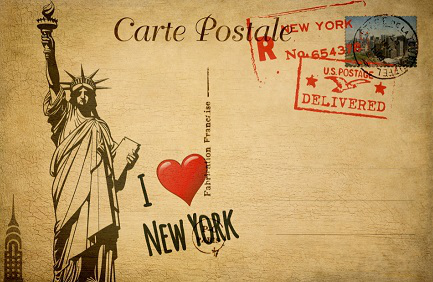 The twentieth century was marked by a huge increase in the city's population, the number of which by the 50s exceeded the 8 million mark. The economic and social life of the metropolis was periodically feverish. The crisis of the 70s, and as a result, rampant crime - made the city not such a 'dream'.
The September 11 attacks, which ominously thundered around the world as a warning about the fragility and vulnerability of the visible power of the United States, added negativity.
The 'Events' series coin issued by the British virgin Islands is dedicated to the tragic events of 2001 in new York. It shows the twin towers of the world trade center, which were attacked by terrorists.

Today, new York lives the same measured and crazy life that is shown in numerous films about the 'American dream'. The city is a reserve of skyscrapers (since land is incredibly expensive), a mix of people of different nationalities, faiths and cultures. Today's new York city is still the ultimate dream of many people seeking fame and fortune.
One of the main squares of Manhattan - Union Square-is symbolically depicted on a postage stamp issued in new York. Another world - famous facility, the UN headquarters, is located in Manhattan. His recognizable image is printed on new York postage stamps, with a face value of 5 and 15 cents. The great Frank Sinatra was right when he called new York 'the city that never sleeps'. You can be at the top of success or fall to the bottom here very quickly. And to keep your number one position, you need to make every effort. However, as everywhere. 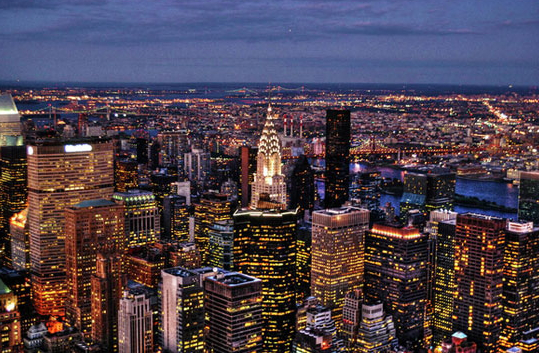 On the contrary, you will not need any effort to create your digital dream collection together with the service for collectors HOBBYKEEPER ONLINE. Register personal account and add an unlimited number coins, marks, postcards, banknotes, pictures. Your meeting will be securely protected, and you can access it anytime and anywhere, thanks to mobile version of the program.
< div>hobby Keeper-your favorite collection is always at hand!
Translated by Yandex.Translator