'May You live like this: one hand in molasses, the other in honey!'

procardia personalities
Bright, cheerful, full of enthusiasm and absolutely childish charm, the postcards of Elizabeth Merkuryevna BEM will certainly not leave anyone indifferent. They are filled with light and life, conveying its meaning in small details, and, at the same time, radiating a fabulous charm. 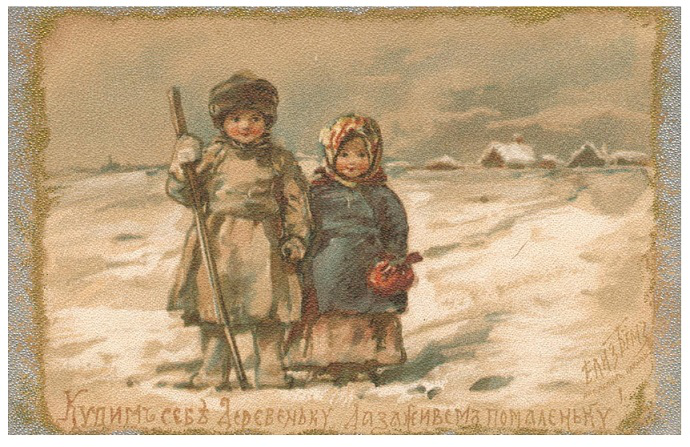 Growing up in her family estate in the small village of Shcheptsovo, Yaroslavl province, little Lisa absorbed all the charm of Russian folklore. The beauty of native nature, folk traditions, details of everyday life-all this interested the talented girl from childhood. She could not imagine herself without the light of the sun peeping into the nursery in the morning, the twittering of birds in the garden, or the sullen song that the Blizzard sang in the oven on long, winter evenings. The impressions of childhood were so strong that Elizaveta Boehm (nee Endaurova) devoted her entire life to visualizing them, sharing them with the whole world. 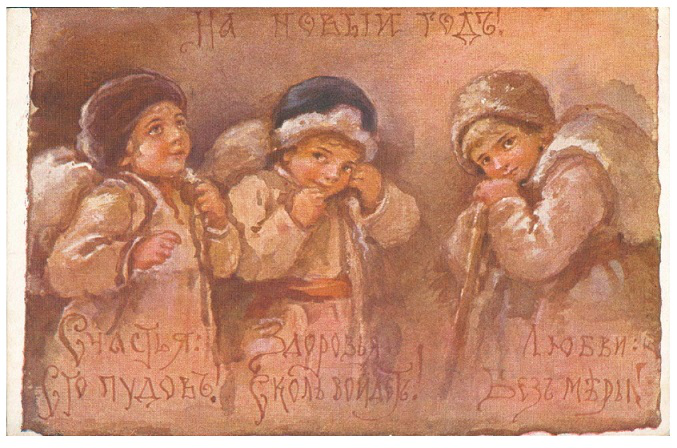 'My fairy tale is written-rewritten, but the master printed on paper is stamped'

As a child, Lisa enthusiastically drew seals and sheep, after this activity became the meaning of her whole life. Having grown up, the world of children's impressions did not leave the artist, being realized in a set of her works.
At 32, Elizabeth Boehm creates her first postcard album 'Silhouettes'. In it, in a rather interesting manner, everyday scenes from the life of ordinary people are depicted, often interspersed with apt Proverbs and phrases 'in the subject'. Then the light saw the collections 'Pie', 'from village memories', 'a little bit of Everything', 'for a cute friend at least an earring from the ear'... 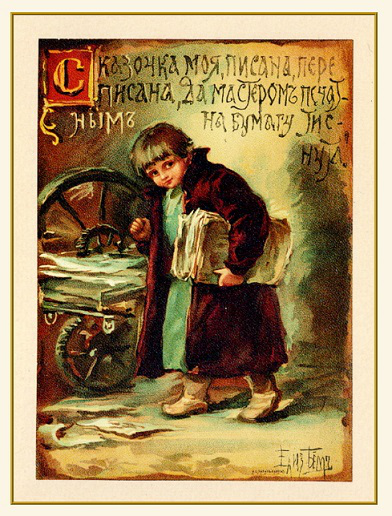 Thanks to the work of Elizabeth Boehm, we, today, can clearly imagine the everyday life of the Russian people, in detail conveyed to the viewer by the artist.
Here is the silhouette of the mother, gently bending over the cradle, and here is the grandmother braiding the girl's pigtail. All the scenes are depicted with great love, are extremely realistic, and the themes are taken from life itself, seen and pinned to paper. By the skillful hand of the artist, they were granted Eternity... 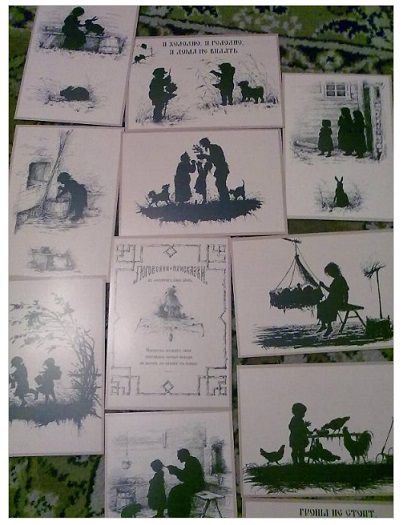 The secret of the popularity of Elizabeth Boehm's work, it seems to me, is simple. It did not strive for barricades, did not embody any revolutionary ideas, which simply bubbled up in history at the turn of the XIX and XX centuries. She just loved life in all its forms, could see the meaning in the little things. 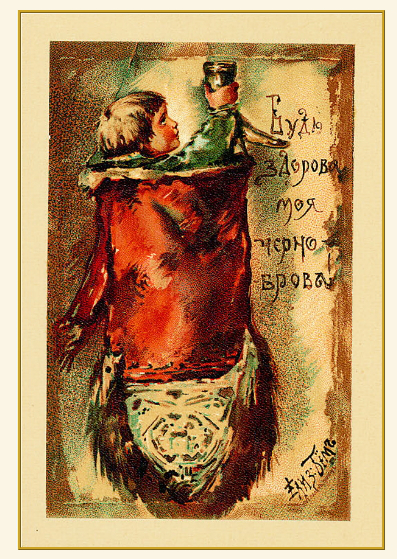 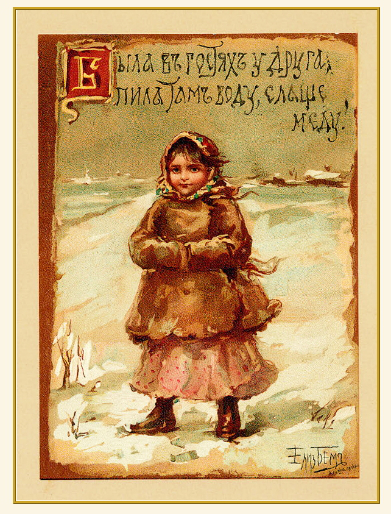 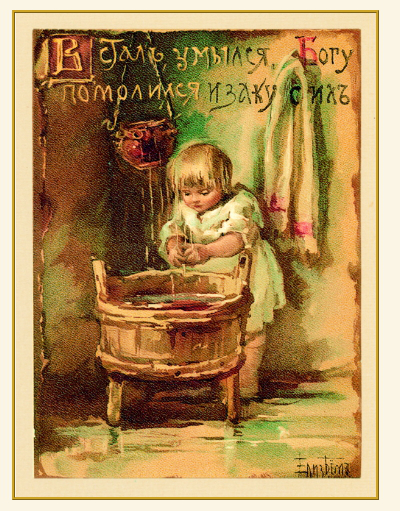 'Holy Nahum will guide the mind!'

It was on the day of the Holy righteous Naum, which falls on December 1, that they began to teach literacy in Russia. The artist perceived the world of letters as a kind of revelation. In her opinion, the alphabet is not a simple list of phonetic symbols. With its help, you can understand the meaning of ancient letters, discover the hidden idea of texts.
In 1911, Elizabeth Merkuryevna, already having sufficient knowledge, begins to implement a long-conceived idea - the creation of an illustrated alphabet. The painstaking work lasted two years, and in 1913 the first edition was published. It contained a rich culture and fundamental folk knowledge, collected bit by bit by the artist and embodied by her in absolutely magical (and, at the same time, realistic) images.
The brave knight and the fabulous Firebird, the mysterious witch Doctor and the terrible Oprichnik look at the viewer from the postcards of the Alphabet, carrying not only knowledge, but opening the secret meaning and transmitting the spirit of Holy Russia. 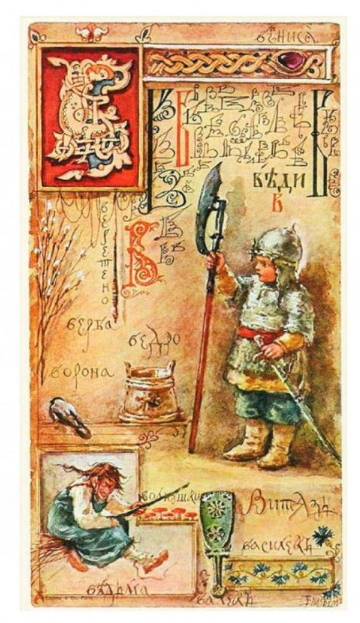 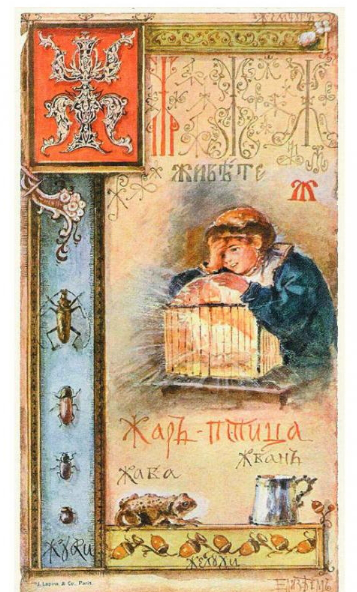 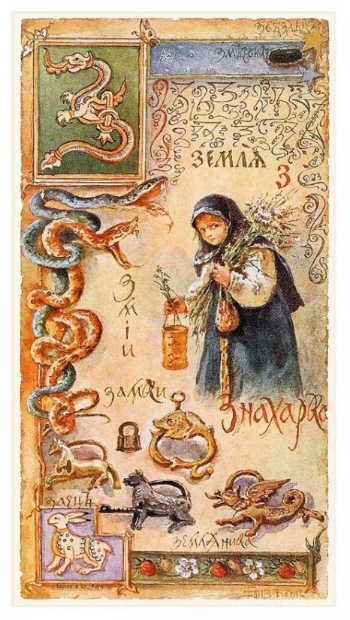 The artist's skill was also appreciated at the international level. Paris, London, Berlin, Vienna - the cultural capitals of Europe applauded the Russian artist, who so skillfully conveys the images of 'mysterious Russia'.
To the world exhibition in Paris was prepared not only Gustave Eiffel. In the Russian section of the Exhibition, glass products created according to the sketch of Elizabeth Boehm were exhibited. They made a real splash in Western Europe, where they love everything elegant and refined. Become the owner of the original postcard Elizabeth Boehm dreams of every avid  philocartist. Numerous copies of them have been produced and are being produced in the world, making the images created by the artist's imagination recognizable and beloved. You can watch them for hours without stopping. They fascinate and possess the soul, as if filled with some magical power, telling their heartfelt story, ending with the famous: 'Here's a fairy tale for you, and a bunch of bagels for me!' 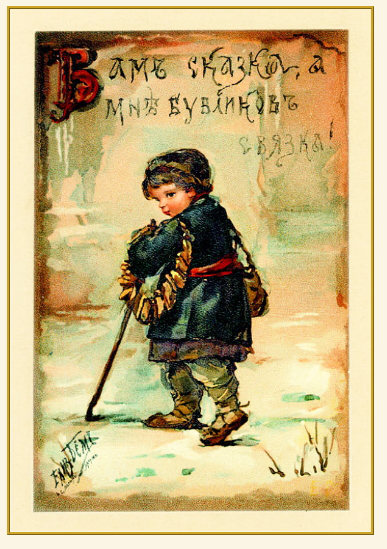 The program for collectors allows you to make a fairy tale come true HOBBYKEEPER ONLINE. With it, you can create and constantly add to your online collection coins, stamps, postcards, banknotes, pictures. Access to the collection is possible from any mobile device and from anywhere in the world thanks to the adapted version of programs.
The Impossible will become possible, and the inaccessible - available together with Hobby Keeper!
Translated by Yandex.Translator