numismatics history personalities
Irina means peace. This is how the name of the goddess of peaceful life (Eiren) is translated from ancient Greek. In fact, this is not always the case. If we talk about the Empress of Byzantium, Irene of Athens, then it is during her reign, from 797 to 802, that a huge number of wars with neighbors, as well as a fierce internal struggle for power, occur. 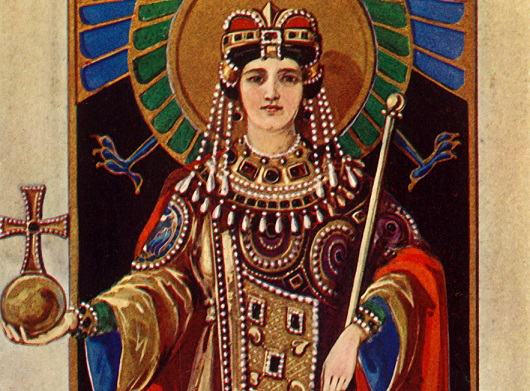 Irene, who grew up in provincial Athens, was an orphan. Its advantages were a noble origin and natural beauty. Golden, long curls, white skin, and sky-blue eyes turned the heads of the men around them. However, her uncle, a noble Athenian and local military commander, Constantine Sarantapekos, who raised her, wanted for his pupil a fate other than just a wife and mother. Therefore, in 768, a marriage was concluded between the heir to the Byzantine throne, Leo, and a representative of the noble Greek family, Irene.
The girl at the same time received brilliant prospects, and the imperial Isaurian dynasty strengthened its position in Athens. In addition, Leo got a charming wife ‒ refined, educated and passionate, as her contemporaries described her. 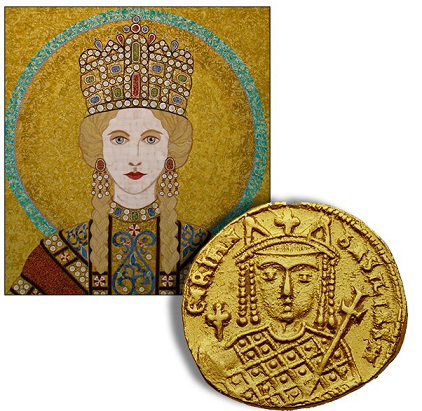 But the reigning Emperor Constantine V should not have rejoiced ahead of time. After looking around here and there, after seven years (by this time, her father-in-law, the glorious general and tough iconoclast Emperor Constantine, is dying) Irina begins to establish her own rules in the empire.
First of all, she begins to persuade her husband, the Emperor Leo IV, to her side in the issue of iconoclasm. Once under her influence, he crowns the young Constantine, which automatically deprives him of autocracy. 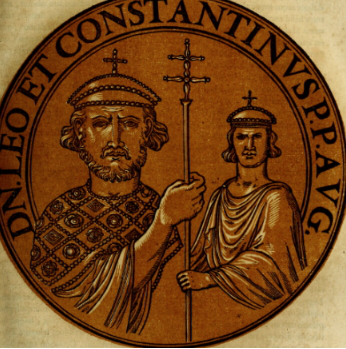 And in 780, Leo IV suddenly dies (perhaps not without the help of his faithful wife), and this fact makes Irene the sovereign regent of the Byzantine Empire. 'The kingdom is not enough, there was nowhere to roam', so she begins to push her line, pushing the heads of supporters and opponents of icon worship. 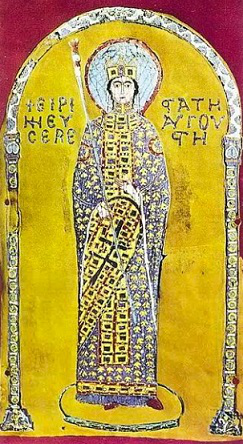 At that time, the issue of veneration of icons was very acute in the Byzantine Empire. The authorities understood that the influence of the church and the monks in society was a serious competition to the authority of the emperor. Therefore, the opposition 'church-emperor' from the beginning of the 8th century resulted in a fierce struggle with the veneration of icons. All images of Christ and saints in churches were destroyed and painted over, all dissenters were subjected to violence, declared heretics, expelled and persecuted.

Women of all classes and, of course, monks came to the defense of icons and all other church rites. Irina was the same lady who made her way to the state helm, who gradually began to return icons to their place of honor on church iconostases, and, at the same time, to provide churchmen with exclusive privileges, well, and access to the state treasury, as usual.Ambitious and wayward, Irina went to power without paying attention to either moral principles or family ties. Seeing an obstacle in her son, Constantine VI, in 797, the mother, without hesitation, orders him to put out his eyes and, organizing a coup d'etat, proclaims herself Augusta.
During the five-year period of her reign, many gold coins were minted, on which both on the obverse and on the reverse was a portrait of Irene of Athens. As part of the inscription, you can consider the word basilissa ‒ the female form of the male title basileus ('emperor'). And only a single coin found in Sicily bears the male form basileus. Well, no wonder, because to gain status among the male world of politics, in those days, this method was also suitable.

In general, Irene of Athens was reputed to be a generous empress, and royally distributed the state treasury to monasteries and churches, and arranged frequent distributions of money to the poor. Reveling in power, she proclaimed herself 'the great Basileus and autocrator of the Romans'.
Such populist methods have certainly earned her love and reverence in the relevant circles. But as for public administration, in this Irina is not a wise manager. Surrounded by court intriguers, eager for the throne, surrounded by external enemies (Byzantium at that time was at war with the Arabs and Bulgarians), Vasilissa could not keep the throne. In addition, the Roman Church, led by the pope, did not take seriously the woman on the throne and considered this position vacant.
As a result, Irina was removed from power by her head of the office ‒ the logophete Nikifor, who immediately minted his image on the new coins of the empire, and exiled the former boss to the island of Lesbos. 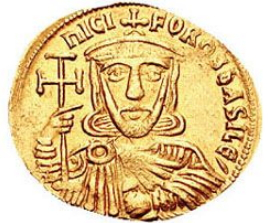 Irina lived there for only a year, until her death. It is said that in exile, she deeply repented of her infanticide, and planted a tree in honor of her tortured son, which she watered with her tears...
The descendants inherited numerous coins of the period of the reign of Irene of Athens, on which, in addition to her portrait, images of the ruling persons of the empire, husband and son, for example, were applied.

And, given the family drama that has occurred, the image of Irina with her son on the golden solid looks quite cynical. 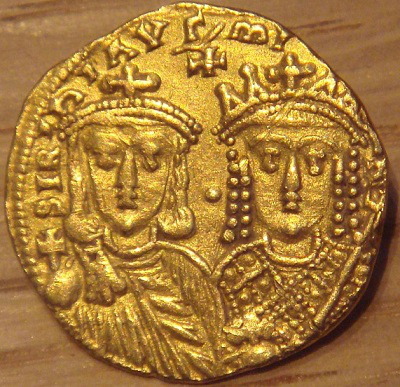 The coins will not lie, and they will tell a lot to the numismatist who is in love with them. To build a complete collection, including even rare instances, use the service HOBBYKEEPER ONLINE. Thanks to the convenient functionality of the program, you can create your own unique online collection coins, brands, banknotes, postcards, pictures. Access to it is possible not only from a PC, but also from your mobile gadget, as we have created an adapted version of programs. Collect, communicate and stay up to date with the latest innovations with Hobby Keeper-and the inaccessible will become available, and the impossible-possible!
Translated by Yandex.Translator