Gangut battle, the first victory of the Russian fleet

history philately numismatics
Russia the end of the SEVENTEENTH century, impoverished peasantry, an idle nobility... All this against the background of complete absence of enterprises, dirty ditches instead of roads, hard economic isolation and incapable of the regular army, unable to win over the poles or over the Turks or the Tatars, their main political opponents. Shameful end of the first Azov campaign, when besieged by the Turks at Azov sea has received food and ammunition, and the Russian army did not have the fleet to block the besieged from the sea... 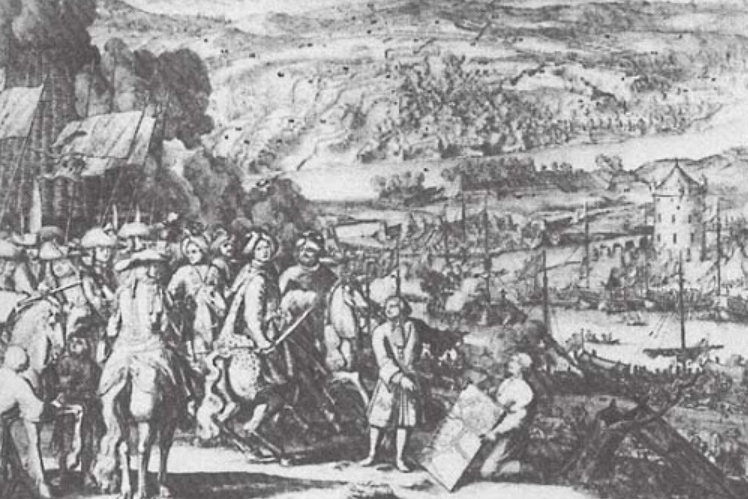 The brighter and more significant against this background, the achievements of Peter the Great, who in less than two decades to create efficient fleet.
The first brilliant victory of the young Russian Navy was reached during the Northern war, August 7 (July 27 Church calendar) in 1714 at Cape Gangut in the Baltic sea. Her opponent was Sweden, at one and a half centuries kiteplace his 'Era of great power' and domination in the Baltic. 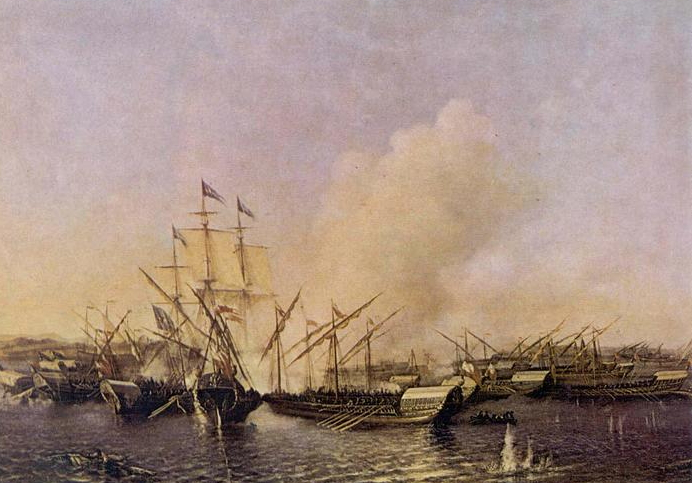 Peter I understood that the 'window to Europe' will help to avoid political, economic and cultural isolation of Russia. It was necessary to expel the Swedes from the Baltic sea to the Russian ship could move freely in the coastal waters leading European States. By order of the king stationed in Kronstadt fleet under the command of General Apraksin went to solve this problem. 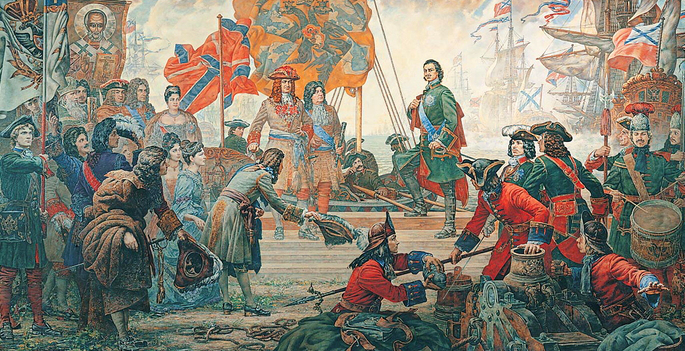 Of course, the Swedish sailing fleet, famous for his military successes and experienced generals, not taken seriously, 80 inexperienced galleys. However, the 'thingy' Russian rowing boats were soldiers-paratroopers, who were sitting on 90-pound oars instead of the usual rowers. They played in the battle a decisive role, when in close combat, the need arose to take a Swedish ship to Board. 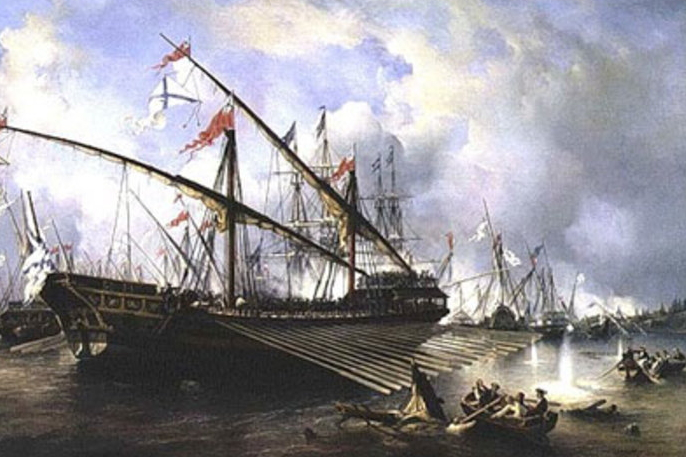 The outcome of the battle could not predict neither the Swedish king Charles XII and his generals. Personally participating in the battle, Peter I (aka shautbenaht Peter Mikhailov) showed heroism, vigorously jumping on Board the Swedish galleys 'Tranan'. The loss of the Swedes and the Russians in the battle of Gangut ratio of 3:1. Wounded and captured was the General Erensheld.
The victory at Gangut made it clear to the Swedes that their overwhelming domination of the Baltic came to an end. Further events (such as the landing of Russian troops near umeå in September of the same year) proved to Europe the strength and power of the Russian Navy.
This event in 1714 in Russia were minted medal, which was awarded to over 3500 participants in the battle. 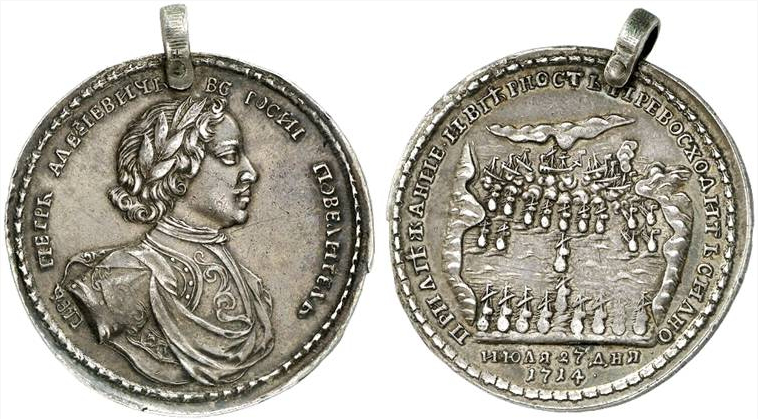 Today's philately and numismatics are not left out, perpetuate the memory of a glorious victory in the form of postage stamps and commemorative coins. To the 300 anniversary of the battle was released a souvenir sheet depicting engravings of 1856 Mauritius Baku 'Battle of Gangut'. The image of the Russian galleys surrounded the Swedish ships, and prepared to attack. 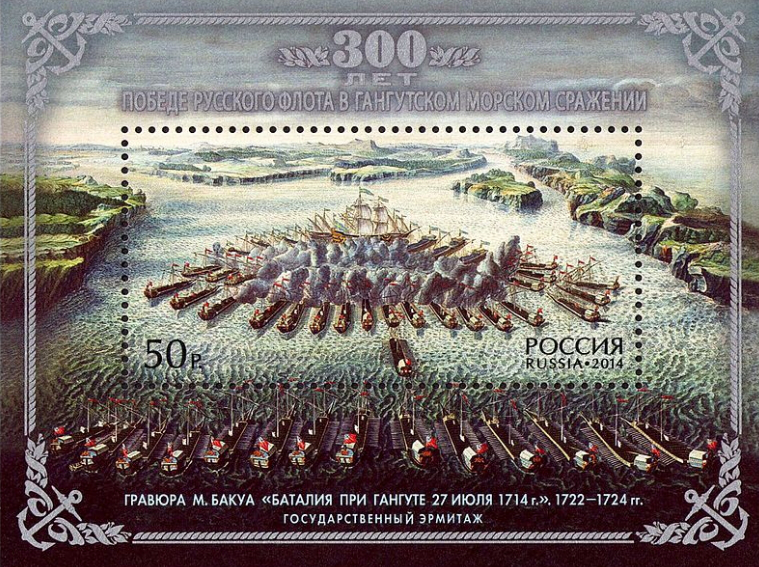 To the 275-th anniversary of mail of the USSR has released a unit, with a nominal value of 50 cents. It depicts Peter the great on the background of the victorious Russian galleys. 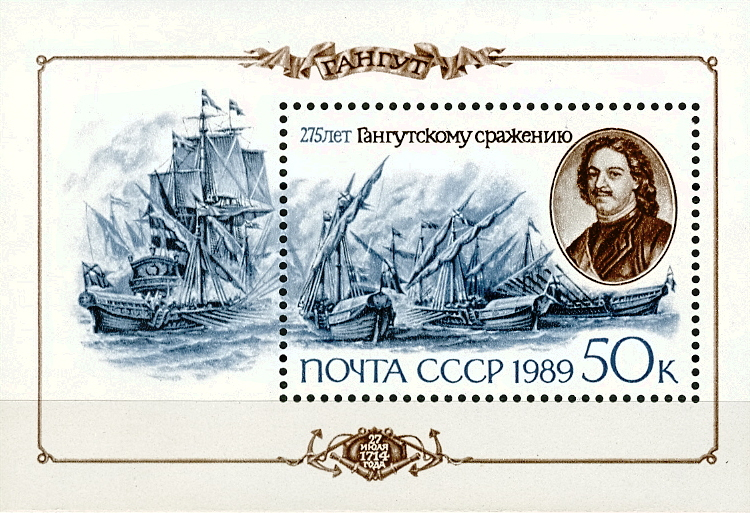 Win your victory with the help of the service HOBBYKEEPER ONLINE. You can create and constantly replenish online collection of coins, stamps, postcards, banknotes, placing a personal account copies of their archives. The program allows you to process and organize information about each item in the collection, it is convenient to manage, add, edit, and quickly find needed.
Your favorite collection has always been at hand, we have developed tailored apps for mobile devices. Therefore, to access the online catalogue brands You be able on your smartphone or tablet anywhere, even while away from your PC.
Translated by Yandex.Translator