When a beard is more expensive than a head

numismatics history
Who would have thought today that a bearded man can cause other associations than the image of masculinity and strength. However, as historical practice shows, the beard often brought its owners very serious troubles. So English bearded men of the 16th century had to pay a special tax to the treasury if their stubble exceeded two weeks of age. And in France, Cardinal Borromeo even tried to ban it on pain of imprisonment. 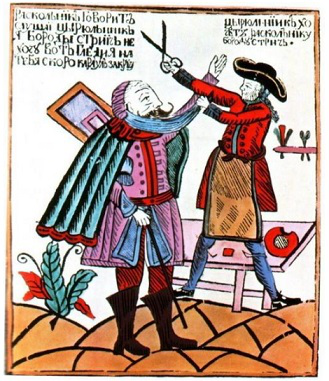 But the Russian tsar Peter I, a reformer and a rebel, went the furthest in this regard. Thanks to him, the traditional Russian beard, always considered an ornament of any man, became the personification of obscurantism and backwardness.
'The epiphany ' descended on the young sovereign after he returned from his famous voyage through the countries of Europe, which was called the 'Great Embassy'. There, the sergeant of the Preobrazhensky regiment, Pyotr Mikhailov, under whose name the tsar of all Russia was hiding, joined the beautiful, knowing the life and way of life of the European new nobility. Having asked the question 'why do we still slurp bast shoes?', Peter I decided that the Slavic dremuchness and lack of enlightenment were to blame for everything, and went on an active offensive. 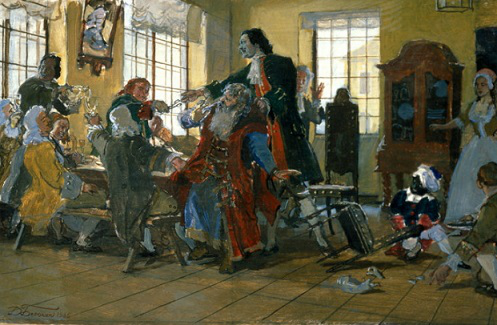 'A beard is an extra burden' - it was under this motto that a large-scale company to combat beards was launched in Russia in 1705. Declaring bearded men outlawed by his decree, Tsar Peter personally began to cut off beards. Special attention was paid to the eternally dissatisfied boyars, whom Petrusha hated (and feared) since childhood ‒ from the very time when the Streltsy, incited by the boyars, wanted to crown Princess Sophia instead of him. 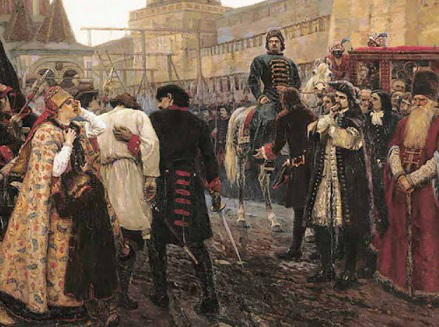 'The beard is grass, you can mow it, ' so everyone was cut, from ordinary employees to noble statesmen. Since the beard was not just an ornament, but traditionally was a symbol of virtue and status, such an action was considered by many as a humiliation and an insult to dignity.
However, the tsar-transformer ardently wanted to bring Russia to the same level with European countries, and one of the methods he considered the transformation of the appearance of Russians. Peter firmly believed that it was possible to build a bright future only by changing his mind. One of the ways was such a radical innovation.
And ten years later, another decree was issued, which tightened the measures to combat disobedience, up to confiscation and exile to hard labor 'without any mercy'. 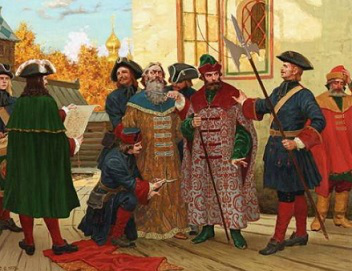 However, you can't send everyone to Siberia, you had to do something with those who did not want to accept the new fashion. After all, there were many useful people among them, for example, a rich layer of merchant people. An exception was made for such people, but not for free.
Having decided that you can't grow a beard without a ruble, Peter I figured out how to kill two birds with one stone at once. For those who wanted to leave facial hair, a special tax was introduced. Its payment amounted to a tangible profit to the state treasury. Starting with the commoners, who were obliged to pay 30 rubles a year for the pleasure of wearing beards, and ending with noble merchants (100 rubles per beard went to the budget from them) - everyone could leave facial hair on their face. Even the peasants (that's where the stronghold of conservatism is) who entered St. Peter Burch were obliged to pay a fee of 2 money from the beard. 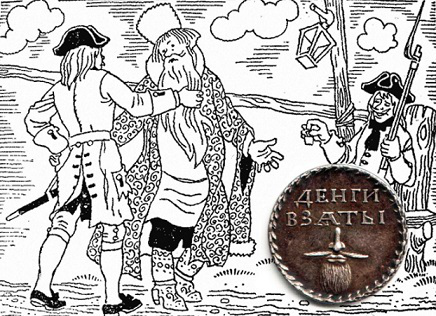 Those who paid the beard tax received a 'receipt' in the form of a small metal token. It was necessary to wear it on clothes, so that anyone who met him could make sure of his civilized loyalty. Moreover, there were always enough people who wanted to 'expose the unreliable' in Russia.

The beard signs that have survived to the present day are a huge rarity, since they were almost all melted down a century later as unnecessary. Realizing that the beard is not a hindrance, in 1772, Catherine II abolished duties for all owners of facial hair.
And we inherited only the original coins. The most valuable of them, dating back to 1699, is now kept in the Hermitage. The token was made of copper, and is the only known instance in the world. On the obverse of the beard sign there is an image of a mustache and beard, accompanied by the inscription 'MONEY IS RAISED'. On the reverse, the year of coinage is marked in Cyrillic ‒ 'THE YEAR of the YEAR'. 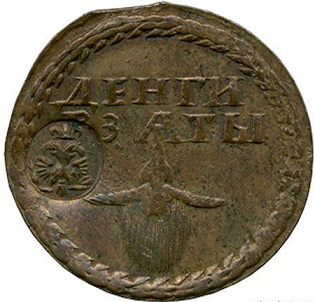 It was in circulation until 1705, when an 'improved' design of the sign was developed, supplemented by the image of a double-headed eagle on the reverse. 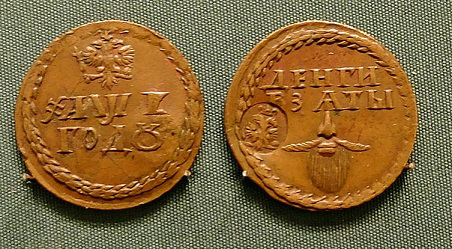 The beard sign of the 1710 year of release is similar in appearance to its predecessor, which makes them easy to confuse. Both of them have supercharges. They were applied after the corresponding payment was made by the owner in order to extend the circulation of the token.
Interestingly, in the 18th century, such badges were used as an independent means of payment. That is why you can find another version of the name ‒ 'borodovye kopecks'. One such copy can make any numismatic collection priceless, and for some connoisseurs of antiquity they are really 'more expensive than a head'. 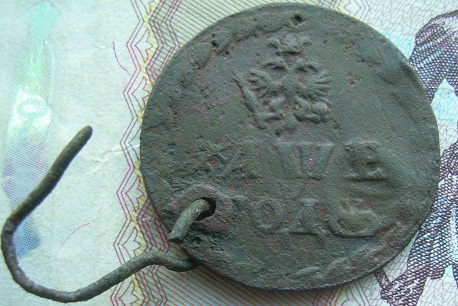 You can add a bearded sign to your online archive using the program HOBBYKEEPER ONLINE. Created by collectors for collectors, it provides unique opportunities for organizing and maintaining collections coins, brands, banknotes, postcards, pictures. With Hobby Keeper, you can take your archive with you even on a trip around the world without fear of damaging or losing it. After all, thanks to the adapted version programs access to the online collection is possible from any mobile device.
Join us, and the impossible will become possible, and the inaccessible will become available together with the Keeper Hobby!
Translated by Yandex.Translator