500 years unchanged – the standard coin of the middle Ages

Golden circle 980-th sample of 3.5 grams, diameter of 21 mm is the most stable medieval currency: we are talking about the gold Venetian Ducat.
The only thing that distinguishes these coins from each other for 5 centuries – the names of the Supreme rulers of the Venetian Republic – Doge, which were minted on the obverse. Everything else from 1284 to 1797 stayed the same weight, alloy, design and, accordingly, recognition of coins and its widespread use in world trade.
Where did the name of the coin - the Ducat? From the last word in the legend imprinted on the obverse: 'SIT TIBI CHRISTE DATUM, QUEM TU REGIS ISTE DUCATUS' ('the Kingdom, which you rule, you, the Christ, is dedicated').
After 1543 Venice began to mint more silver coins, gold coins were called pieces (Zecchino) of the word zecca - the mint.
The obverse decorated with the image of the patron Saint of Venice, the Evangelist Mark, handing banner to kneeling Doge. On the reverse there is the image of Jesus Christ in a nimbus in the shape of an ellipse.
PET LANDO S M VENET DVX – this inscription distinguishes this coin from the coins issued during the reign of other Doges.
Pietro Lando was elected the 78th on account of the Doge of the Venetian Republic and has been for almost 7 years c 19 Jan 1539 on November 9, 1545, It was a difficult time for Venice: hunger in 1539 and in 1543, territorial conflicts with the Ottoman Empire, disputes with the Pope about the empowerment of the Holy Roman Inquisition, the corruption scandal in Venice on the sale of state secrets to the enemy. 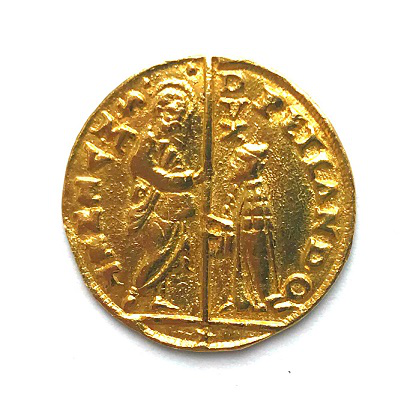 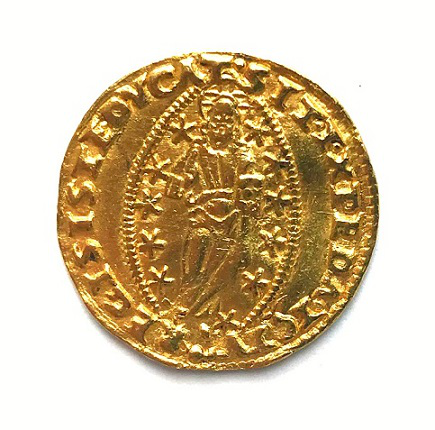 It is important to understand that Venice in the XVI century – is not only a city in the lagoon: the possession of the Venetian Republic at various times included Parma, Treviso, Bergamo, the island of Cyprus, part of Croatia, Slovenia and colonies in the middle East and the black sea region – these belonging to the territory the Venetians called Domini di Terraferma (solid ground).
Sequin was not only in the territories that were part of the Republic – thanks to its stability, it in fact performed the functions of money in international trade: the goods of the Venetian merchants created a demand for pieces far beyond Venice. Later he became a reference for many countries in building up the national system of monetary circulation: it took the in Germany when the minting of Guilder, in Poland – zloty Russia – gold pieces.
What you could buy for 1 pieces? According to contemporaries, 15-20 gold ducats of the money enough to live a wealthy Venetian in the course of the year.
... And in Russia at this time reigned Ivan the terrible, and gold coins in circulation did not exist - no.