Beethoven: the Moon, the Beatles and a little love

numismatics personalities
Speaking 'Beethoven', we mean first and foremost 'Moonlight Sonata', is thoroughly permeated with love longing and sadness about what you really want, but it is impossible to achieve. German composer Ludwig van Beethoven lived a remarkably productive life, however, is to achieve personal happiness and could not. Perhaps the reason was its many ardent passions women of the aristocratic circles of what do mere mortals were not supposed to. Maybe he was just unlucky to meet the one who would have appreciated, understood and loved the raging passions of the inner world of Beethoven... 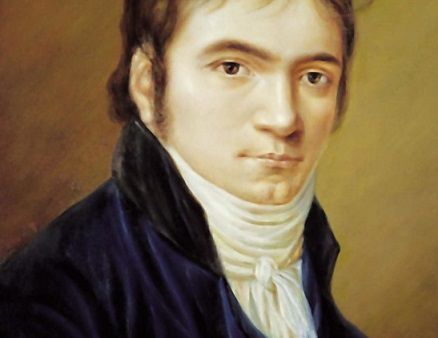 He was a native of a simple family. Parents (his father was a court tenor, his mother - the daughter of the chef) wanted to make Ludwig the second of Mozart, whose fame a musical Prodigy thundered at the time in Europe. However, the boy's fate turned out differently, after his mother's death father took to drink, and he, seventeen years old, had to work to support younger brothers. Dream to take lessons from Mozart himself remained a dream. However, Beethoven was elated and inspired by the great Austrian, who heard him improvise and he cried, startled; 'He will force all to talk about themselves!' 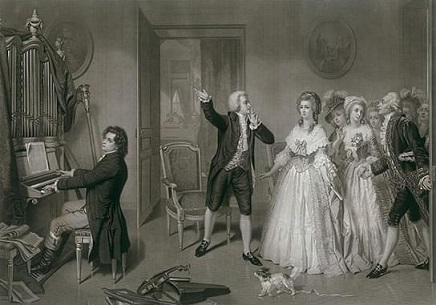 Talking about Beethoven began after his move to Vienna as a virtuoso pianist. His mentor was himself Haydn, but he was unable to give much of a crooked and sharp-tongued young man. Soon, Beethoven begins to take lessons from Antonio Salieri.
The rise of the musical career of Beethoven was marred developed his deafness. For the composer it was like death, but Beethoven did not give up and continues to create. Yet the rumor is he is, he listens to the murmur of water, birds singing, and doing, doing, doing... 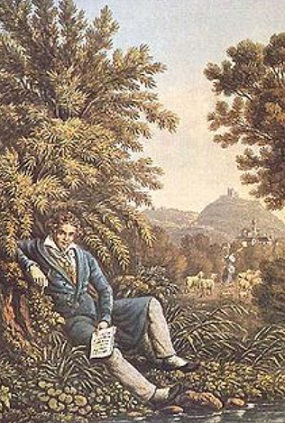 The period of creativity of Ludwig van Beethoven coincided with the time when Europe was seething revolutionary spirit. The French revolution was joyfully greeted by the composer, however, the self-proclaimed Napoleon the Emperor bitterly disappointed him.
For 15 years, Beethoven had the idea to write a grandiose Symphony, which would be able to unite, to bring people together. The result of creative combustion has become world-famous Symphony No. 9 premiered in 1824. It was her fourth piece, 'Ode to joy', used today as the Anthem of the European Union, its stunning universal sound, exulting and admiring life. If in doubt, it's soul scratching cats and the future seems gray and bleak and plunge into the world of the 9th Symphony of Beethoven. It will exalt You from the lowlands to the heavens promised, inspire and instill confidence in the future!
250th anniversary of the composer's birth which the world celebrates in 2020, the Vatican issues commemorative coin with nominal value of 5 euros. The Roman mint will mint 13 thousand copies of a bimetal: 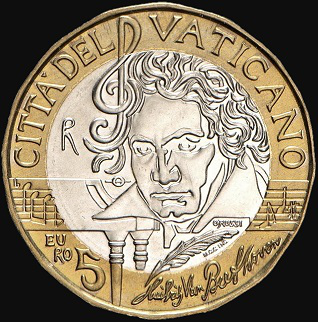 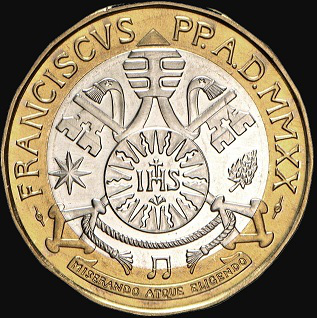 The Issuer of Fiji to the anniversary of the birth of Beethoven minted gold commemorative coins alloy with a mass of 0.5 g is Written on the obverse the motto of the state 'Fear God and honour the Queen' is not a fact that would come to mind critical Beethoven: 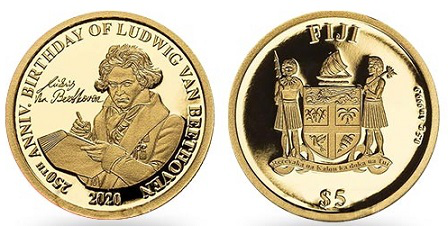 Attentive listeners say that the optimistic 'the Fab four' had based their hit song 'Because' 'Moonlight Sonata' by Beethoven, played in reverse order. Thus the Beatles ' admitted love of the great romance. Who would have thought that classic rock is based on the classics of the Viennese classical school! Today, Europe honours the memory of a great musician, releasing in his honor a Golden round 'Ludwig van Beethoven' from the pure metal weight of 0.5 grams: 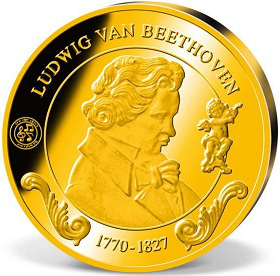 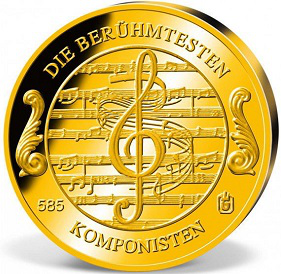 The homeland of the great composer is remembered and loved. In his honor, in the winter of 2020, Germany has minted a silver coin with denomination of 20€:

Not only the descendants, but his contemporaries admired Beethoven as an innovator, who founded a new era in music - romanticism. His portrait German portrait painter Karl Stieler written in 1820, 7 years before death. The composer is depicted with a flaming glance, his lips pressed tightly together and his forehead cut through stubborn creases - the artist managed to convey to posterity the character of Beethoven, to capture his passion and inner fire. 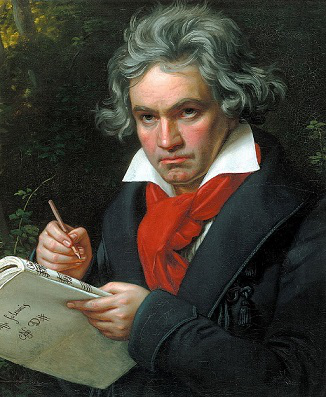 Collectors of painting will certainly be interesting to other portraits of the great composer performed during his life and after the death of Beethoven. And do not be upset by the fact that they are stored in leading museums of the world - due to service HOBBYKEEPER ONLINE , You can easily make your own digital collection of paintings.
Register a personal account, and add your archive of the world's masterpieces in unlimited quantity! We guarantee access to collections of collections of coins, stamps, postcards, banknotes, paintings not only from PCs but also from any mobile device versions of the programs adapted for devices running iOS.
Bring your favorite library!
Translated by Yandex.Translator