philately
Looking into the future, you always analyze the past. To avoid mistakes and not to step on the same rake. Remembering the events that took place in the world in the first half of the twentieth century, a wild horror takes hold at the thought that the Second World War may happen again, and the ice killers in the form of the SS will appear somewhere again. Where was the point of return, after which Germany inevitably took the path that led the world to disaster? Perhaps the events of the Beer Hall Putsch of 1923 will help answer this question.
Playing on the ferment of minds that was observed in Germany, which was brought to its knees after the defeat in the First World War, Hitler calculated everything accurately. The discontented Germans did not know who to rely on and what to expect in the future. Subtly grasping the confusion of society, the future dictator realized that the frightened sheep would take the iron hand with the whip with a bang. And, having laid the basis of his strategy the idea of a certain exclusivity of ethnic Germans, Hitler rushed to power.
As subsequent events showed, the political picture in the country was formed for the dictator in the best way. Enlisting the support of the national hero General Ludendorff, as well as relying on the trunks of the extremists of the SA ('Storm troops'), in November 1923, Hitler made the first attempt at a coup d'etat. 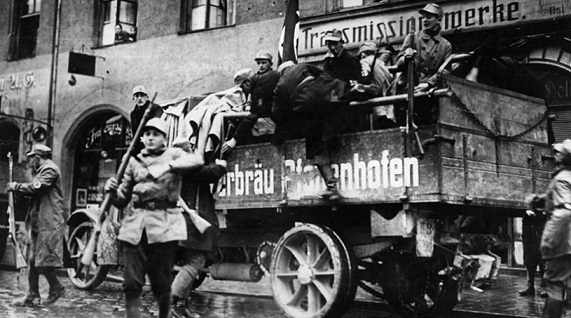 The Beer Putsch owes its name to the Munich beer hall 'Burgerbreukeller', where the Bavarian elite gathered. Everyone wanted to listen to the speech of Commissar von Kar and the leaders of the local security forces, waiting to understand where Bavaria should move next: together with Germany, or go on their own, separate path of development. 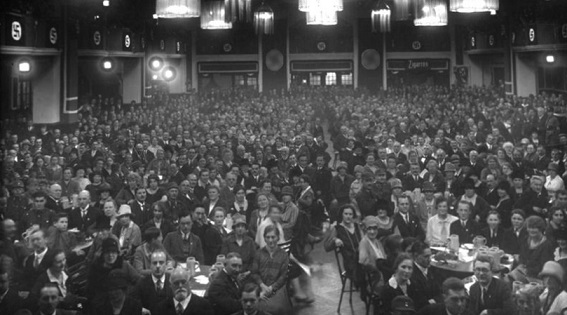 The fact is that Bavaria did not recognize the state of emergency, which was declared by Berlin throughout Germany on September 26, 1923. This is how the government reacted to the mass discontent of the Germans with the introduction of paramilitary units of the victorious states into the territory of certain lands. After all, Germany could not pay the unbearable reparations. Perhaps, if things had turned out differently, the territorial integrity of Germany would have remained in the distant past, being divided between the Entente countries. And after 20 years, the world would not have remembered that there was once such a state as Germany.

One way or another, the Beer Hall putsch was defeated. Its instigators, including Adolf Hitler, were arrested. But no one could have foreseen that the eloquent orator, the professional agitator who was Hitler, would draw conclusions and in the near future be able to concentrate unthinkable power in the hands of the state and economic elite of Germany. 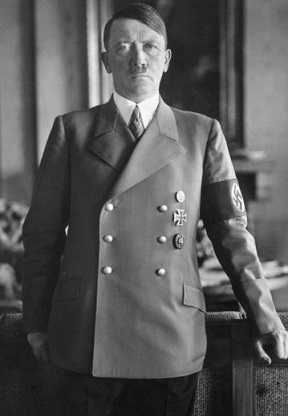 Playing on the national feelings of the Germans, Hitler dragged his sick, vain self to power, building for this purpose an entire ideology called Nazism. Among other activities aimed at exalting the ideas of national socialism, there was also the issue of commemorative postage stamps. The tenth anniversary of the Beer Hall Putsch, which came to power in 1933, was celebrated magnificently by the Nazis, including the introduction of 64 thousand copies of thematic postal blocks. In subsequent years, stamps dedicated to this event were issued annually. Until 1944, but there Hitler was no longer up to philately. 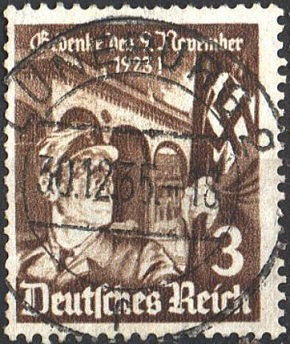 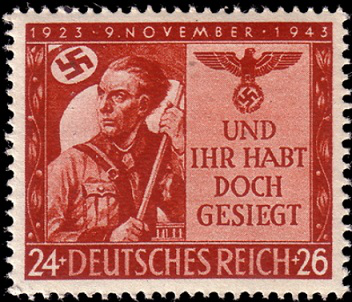 The very first block consists of four pronged stamps with the overprint '1923-1933' in denominations of 5, 10, 20 and 50 pfennigs. On the field there is a watermark with the inscription in German '10th anniversary of the Beer Hall Putsch'. It was released on November 29, 1933. A feature of this rarity is the presence of a large field, which is not preserved in all instances. The fact is that because of its unusually large size, 209 x 148 mm, many owners simply cut off the excess to comfortably fit in the album. But in fact, they cut the cost of the rarity, because the luxury state of the block is determined by the complete safety of its field. According to the 'Michael' catalog, the cost of a full-fledged block today reaches 7,000 euros. 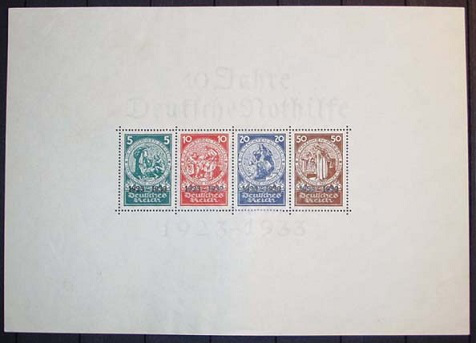 These days, collecting stamps of the Third Reich is prestigious and profitable. In the philatelic market, their value reaches an impressive size. Perhaps the reasons for this interest of contemporaries in the legacy of the Third Reich lie in the very desire to solve the riddle: where did the world miss, and where is the very point of return, where it was not too late to turn off the terrible road called fascism... 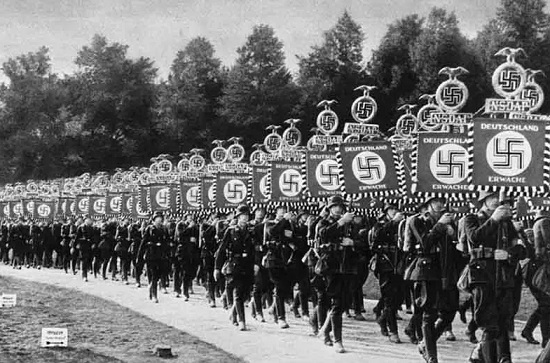 To add to your collection of significant historical events, you can use the program HOBBYKEEPER ONLINE. It allows you to create a complete online collection of rare instances brands, coins, postcards, banknotes, paintings dedicated to memorable dates in the history of mankind. Access to the collection is guaranteed by the adapted version programs that allow collectors to open their archive from any mobile device, anywhere, 24/7.
Join us, and the inaccessible will become available, and the impossible ‒ possible together with Hobby Keeper!
Translated by Yandex.Translator