The Russians don't give up

philately
Despite the official boycott of the XXII Olympic Games by the antagonist countries of the USSR, the Olympic capital Moscow hosted 5,179 athletes from 80 countries in 1980. Including those who boycotted the Olympics. The Games were held for the first time in a country representing the socialist camp. And this fact, at the height of the Cold war, became the reason for the capitalist camp to say its loud 'fu' to the stronghold of world communism ‒ Moscow. And then the USSR in December 1979 introduced its troops into Afghanistan, which was the official reason for the world ignoring the Olympics-80. However, the Russians, as you know, do not give up. And at the Moscow Summer Olympics, Soviet athletes won 80 gold, 69 silver and 46 bronze medals, rightfully taking first place on the podium.

However, the response to the 'friendly assistance of the DRA' was very resonant. Having survived the New Year holidays, the then US President Jimmy Carter already on January 4, 1980, raised a worldwide hype with a proposal to move the Olympic Games from Moscow to Greece. Otherwise, he promised to resort to a political protest-to defiantly ignore the Moscow Olympics. As a result, not a single athlete from the United States took part in the Olympics. Than deprived the Soviet Union of serious competition.
Other countries of the world joined the protest action. Including Germany. Moreover, Bonn decided not to let its athletes in the 'evil empire' just a couple of months before the start of the Olympics. Therefore, the German national team, which had been preparing for several years, was in a rather stupid position.
However, not only athletes suffered. As usual, in order to promote sports, the German postal service has prepared and printed a 30-thousandth edition of thematic stamps. And then, when all of them had already been sent to the post offices, the news came that West Germany had joined the boycott of the Olympic Games.
Being held hostage by the situation, all the post offices of the country were forced to send the stamps back to the Deutsche Bundespost. There, the entire print run was destroyed, traditionally preserving two 50-stamp sheets for archives. 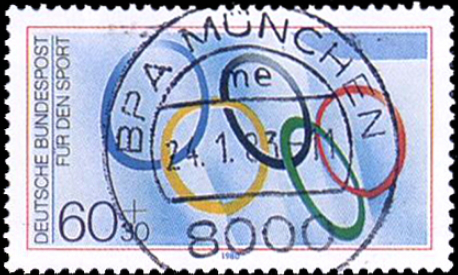 However, the most interesting history of the brand does not end there. As shown by subsequent events, among the 'survivors' were another 50 copies. The fact is that the then Minister of Post and Telecommunications of Germany, Kurt Gschaidle, resigned just in April 1980. As a memento of his past work, he took with him a sheet of Olympic stamps, which had been gathering dust in the ex-minister's desk for two years. Until in December 1982, Frau Gschaidle reached him, who was just sending Christmas greetings to her relatives and friends. Considering the stamp quite viable, the ex-minister's wife pasted a stamp with a face value of 60+30 pfennigs on all her postcards and letters. As a result, 24 copies of invalid stamps were released into real postal circulation, although many experts today call the total number of stamps from the sheet ‒ 50. 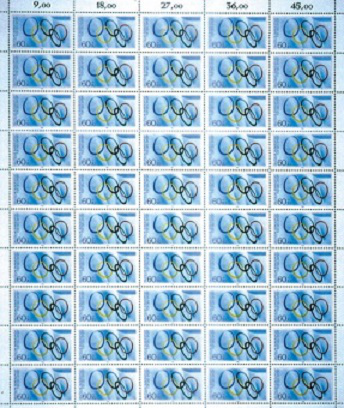 The ubiquitous press was the first to make a fuss. 'Gschaidle! I'll ask you to stay...'- this is probably how German Chancellor General Helmut Schmidt began his conversation with the hapless ex-minister. It was about an official misconduct that led to a violation of the Bundespochta's financial balance. As a result, the embarrassed Herr Gschaidle was forced to publicly apologize, as well as buy a similar number of stamps and give them to the Postal Ministry free of charge. 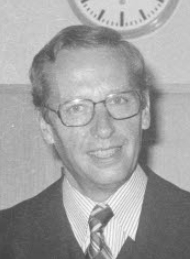 Despite the very unpleasant situation in which he found himself, Kurt Gschaidle, in spite of himself, immortalized his name. 'Mark Gschaidle' ‒ this is what philatelists today call the Olympic stamp, which, although it was issued, was not officially put into circulation. And only a frivolous act of the former minister breathed life into her.
One way or another, but today philatelists all over the world are scouring in search of the lost Gschaidle stamp, turning over mountains of kiloware mixtures, without losing hope to catch an unidentified copy of the Olympic stamp.
The brand itself looks modest. In the context of the East ‒ West confrontation, which escalated in the 80s of the last century, Germany did not particularly advertise the venue of the future games. The Olympic theme can be traced only in the five multicolored rings on the background of the waving banner of the International Olympic Committee. 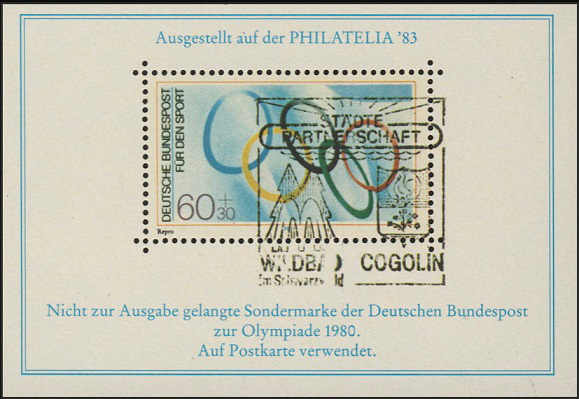 The nominal value of the Gschaidle brand is 60+30 pfennigs, and the additional payment of +30 was in favor of the German Sports Union. The current value of the rarity exceeds 100 thousand euros (stamp with envelope) and 30 thousand euros for a single copy. That's how an official misdemeanor perpetuated the name of an official, and a plot error turned a modest stamp into an expensive philatelic rarity. 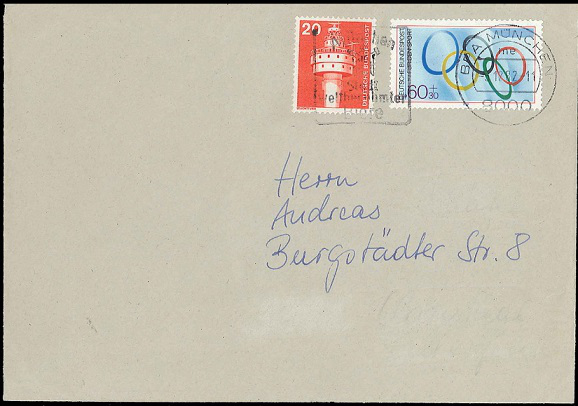 Program HOBBYKEEPER ONLINE allows you to create online collections brands, coins, banknotes, postcards, pictures without any restrictions. If the instance you are interested in is available on the Internet ‒ it will be yours in just one click. Create personal account and add the latest news to your archive, keep records of transactions, easily communicate with collectors around the world.
Join us, and the inaccessible will become available, and the impossible ‒ possible together with Hobby Keeper!
Translated by Yandex.Translator