what we have is What we sew

Notgeld as a surrogate money differed not only in its simple design, the Germans and Austrians went down in history and the materials from which they managed to make local money.
Paper and cardboard – this was the beginning, then the inventive Aryans began to use almost everything on which it was possible to imprint the denomination. Notgeld was made from various fabrics (linen, silk, velvet), wood, leather, coal, and even porcelain: Meissen porcelain seemed to the enterprising Saxons quite suitable material for making notgeld coins.
We will talk about notgeld from flax.
Germany, North Rhine-Westphalia, city of Bielefeld. The city is an old one, founded in 1221 as the residence of the count of Ravensberg. In the XV century, it was part of the Hanseatic League and was famous for the production of linen fabrics: it was in the weaving factories that most of the city's population worked.
The initiator of the issue of notgeld from flax was the Director of the savings Bank (Stadtsparkasse) of Bielefeld, Paul Hanke. The occasion was appropriate – in 1921, the townspeople celebrated the 700th anniversary of the Foundation of Bielefeld.
The mayor of the city, Rudolf Stapenhorst, supported the banker's initiative, and notgelds of various denominations were born from what is always at hand in Bielefeld – from linen fabric. 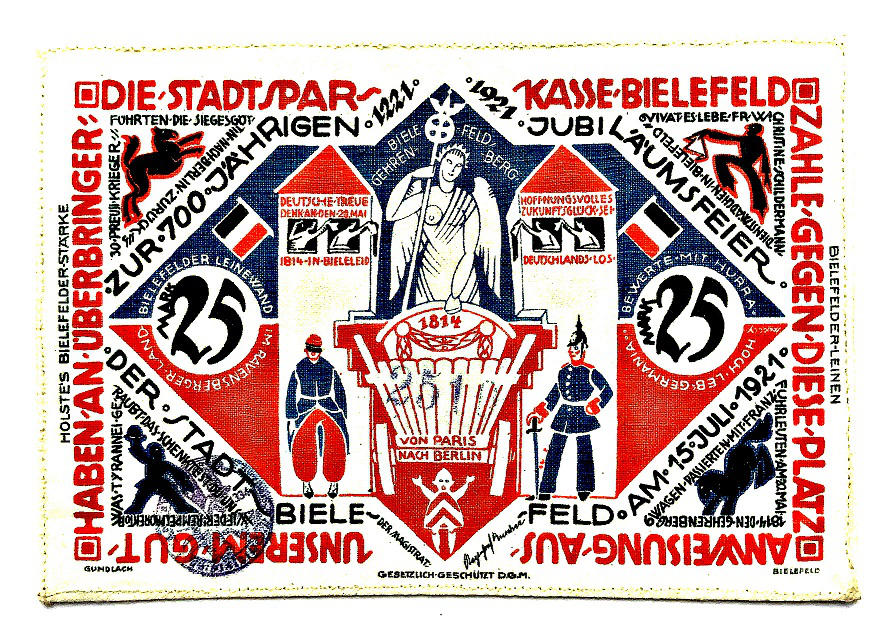 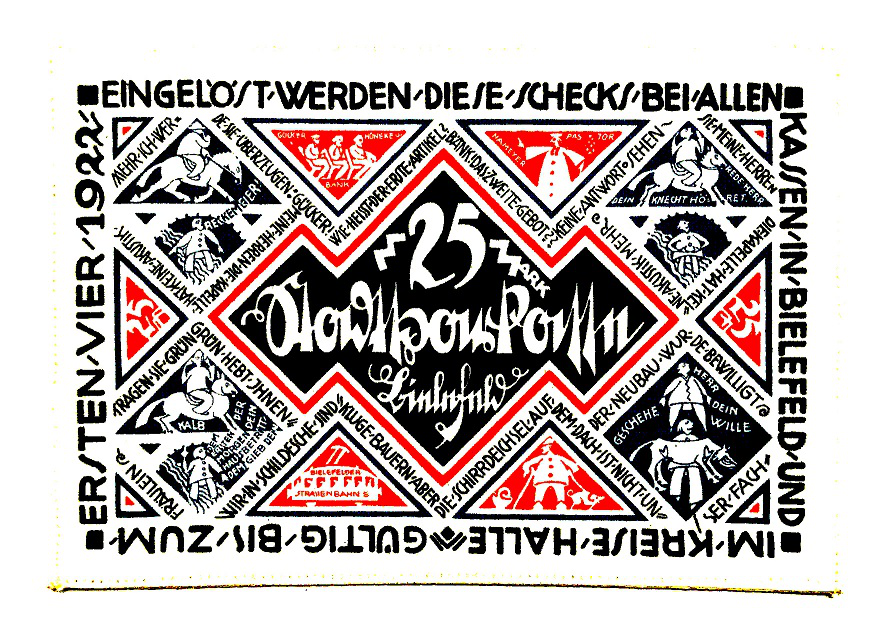 Shirts and linen from linen in Bielefeld were able to sew – they also figured out how to make money. The obverse was printed on one piece of fabric measuring 116 mm x 76 mm, the reverse – on another piece of fabric of the same size, then both pieces with different patterns were carefully sewn. All - the money is ready!
According to the catalog, my 25 linen stamps were born from 15.07.1921 to 1.04.1922
“ZUR 700 JAHRIGEN 1221-1921 JUBILAUMSFEIER DER STADT BIELEFELD AM 15 JULI 1921 ' – the inscription on the obverse of the anniversary bill explains the reason for its appearance.
The main theme of the obverse is the war with Napoleon, who passed through Bielefeld with the army in 1812.
In the center, a winged woman with a staff in her right hand holds a shield with the inscription “'VON PARIS - NACH BERLIN”with her left hand. On either side of the female angel are two towers topped with black, white and red German flags with residents leaning out of the Windows, who greet the liberators with handkerchiefs - clearly not the French.
Below is a toddler with raised hands pointing at an unarmed French soldier on the right hand and a Jolly German soldier with a saber on the left.
The reverse of the bill is a series of images designed in the typical notgeld style: burghers, soldiers, horses, dogs.
In the zigzag fields that frame these images, captions in black capital letters have a rather strange content. Judge:
MEINE HERREN DIE KAPELLE HAT KEINE AKUSTIK MEHR – My Lord, the Church has lost its acoustics.
FRAULEIN TRAGEN SIE GRUN / GRUN HEBT IHNEN – Madame, wear green – in green you are taller.
WIR IN SCHILDESCHE SIND KLUGE BAUERN – We are all good peasants here in (the suburb of) Schildesche.
In addition to the 'factory work' on the obverse, the number 251 (in the center) and the stamp (at the bottom left) are printed in blue ink – after all, they did not sew handkerchiefs, but money.
Judging by the state of the money, my linen notgeld did not get into circulation – either it lay in the factory in the finished product warehouse, or it immediately ended up in the bonist collection.