philately
The probability of the appearance of a rare brand is always very small. However, there are still rarities in the world, the cost of which reaches simply incredible figures. Like, for example, 'Holy Grail' stamp, the price tag of which is expressed by the number 3 with six zeros, or a couple of 'Mauritius', the cost of one of which, blue, is 15 million. Dollars, of course.
Among these expensive stamps is a Swedish philatelic rarity-a yellow trehskillingovik, which was published in 1855. Decipher the mysterious name is quite simple. The first part means its face value - three, and the word 'skilling' is consonant with the well-known shillings. It was in the' skillings of banco ' that the Swedish exchange currency, which had been in circulation since 1835, was calculated at that time. 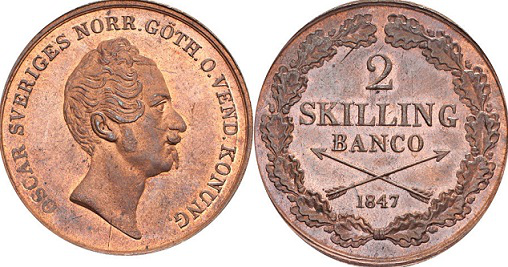 The idea to improve the system of sending letters first visited the Swedish Colonel Kurri Treffenberg in 1823. Long before the appearance of the first domestic postage stamps, he proposed to the Riksdag of Sweden to start sending letters in special sheets folded in an envelope - 'Porto-Charte'. They had to be marked with either an embossed payment sign or a bright pattern that was difficult to falsify.
Statesmen scoffed at his idea, calling it ' ridiculous.' Well, yes, it was much easier to strain the Swedish landowners, who almost free of charge and from under the stick had to transport mail bales around the country. A wax seal was placed on the letters, and if the letter was urgent, a bird's feather was attached to it.
No guarantees of the safety and urgency of delivery of correspondence, of course, in this case was not worth thinking about. This postal service officially existed until 1870.
Mr. Treffenberg's idea was partially implemented. Since 1824, Swedish newspapers have been issued with tax stamps applied to them. For their design, a sketch of the colonel in the form of the state emblem was useful.

The year 1855 was a landmark year for the Swedish state in terms of reform. After the death of the conservative King Carl Johan Bernadotte, power gradually began to liberalize. Changes have come in many areas of Swedish life, including financial.
It was in the 55th that a reform was carried out, involving the introduction of a new, decimal monetary system. It was significantly different from the previous one, where the main units were Riksdalers with a very complex division into 'specie', 'banko ' and'riksgeld'. Now a new exchange unit was introduced into circulation - the era, which replaced the skilling.
Along with the innovations in the financial sector, the changes also affected the post office. In 1855, Sweden issued the first postage stamps in its history in five denominations: starting with 3 and ending with 24 skilling banco. Each was characterized by its own color, and their cost was calculated by the usual Swedish change money. The stamps were decorated with the Swedish coat of arms by Count P. A. Spare.
Then begins the most incredible and mysterious story, thanks to which the brand 'yellow trehskillingovik' was born. The fact is that the eight-shilling copies were issued in yellow, and the three-shilling ones were in green color. 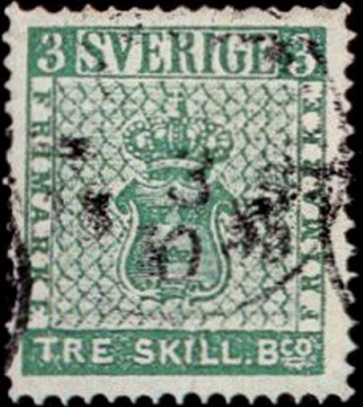 Whether they forgot to change the paint after 8-skilling, or the cliche in a hurry put another-it is not known for sure to this day. One thing is clear: thanks to a typographical error, the world saw a printed sheet of yellow three-shillings. The defect was quickly eliminated, but several ' bad ' stamps still slipped into free circulation. Only one has survived to this day, taking an honorable place among the philatelic unique collections. 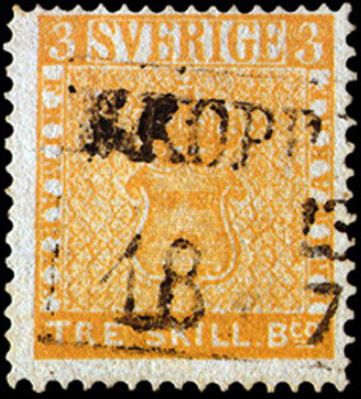 It was used for its intended purpose in 1857. It was pasted on an envelope that was discovered 30 years later by a boy named Georg Buckman among his grandfather's letters. The stamp was purchased from a schoolboy by a local philatelic merchant named Lichtenstein for just 7 kronor. Quickly realizing what he was dealing with, he began 'promotion'a rarity by showing it at a public exhibition. And soon the yellow trehskillingovik found a new value of 4 thousand guilders. It was this amount that the famous collector Baron Philip Ferrari paid the merchant for the first non-standard stamp of Sweden.
The unique changed its owners many times, it was even in the hands of barons and kings. And in 1978, at an auction in Hamburg, the jewel was purchased by a private amateur collector for 1 million marks. Since then, nothing is known about the rarity, but every self-respecting philatelist dreams of getting it in his collection.
And this opportunity is provided by the program for collectors HOBBYKEEPER ONLINE. By creating personal account an enthusiastic enthusiast will be able to get a digital version of any rare coins, stamps, postcards, banknotes, pictures. You can add a description, comments, share the link with friends, and edit the collection not only from your PC, but also from any mobile device thanks to adapted version of the program, located anywhere in the world.
And the impossible will become possible, and the inaccessible-available together with the Hobby Keeper!
Translated by Yandex.Translator