numismatics philately history attractions
Livadia Palace is one of the most beautiful architectural structures in Crimea. The walls of the building, the paths of the Park just breathe history. After visiting the former Royal possessions, located 3 km from Yalta, the soul remains a pleasant feeling of contact with time. The Romanovs, Stalin, Roosevelt, Churchill, Gorky, Mayakovsky, TWAIN - the list of celebrities who 'sanctified' the Palace with their presence can be continued for a long time.

Today, anyone can enjoy the scenery surrounding the area. You just need to take a ticket to the village of Livadia - and here you are at the very place where the post-war Yalta conference was held in 1945, wrote the great Aivazovsky, representatives of the ancient Romanov family set foot. 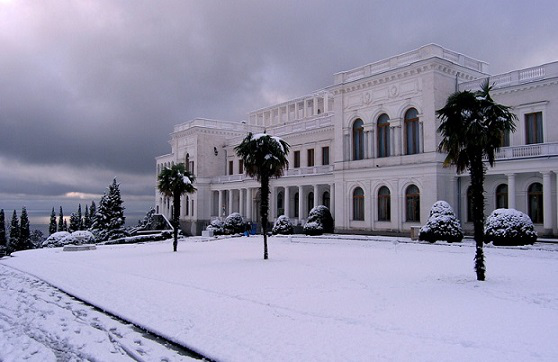 Collectors painting, of course, will be interesting picture of Aivazovsky, written by him in 1861. It was from this period that interest in the location of the powerful of Togo - namely, the Royal family-began. 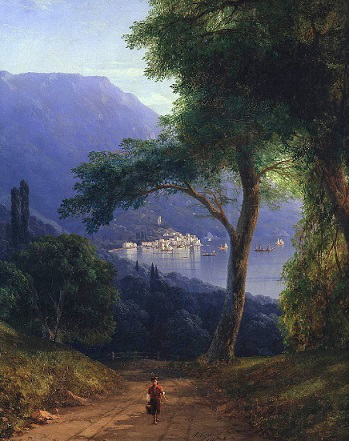 The history of the construction of the Palace goes back to the distant 19th century, when in 1834 the territory of the current village of Livadia was acquired by a Russian diplomat, count Lev Potocki. Of course, there were no castles or manors here at that time. The land that originally belonged to the Crimean khanate, after its entry into the Russian Empire, was distributed to soldiers who distinguished themselves in the battles with the Turks.
One of these lucky people is a General of the Russian army of Greek origin (and who of the Greeks in those days was not an enemy of Turkey?) Theodosius Revelioti. It was he who became the original owner of the cherished meadow (this is how 'Livadia' is translated from Greek)-a delightful corner of the Crimean Peninsula, and later sold it to Potocki. 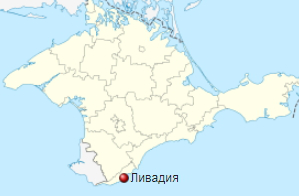 First of all, count Potocki started growing vineyards, laid out a landscape Park on 40 acres, and built a house for himself. This is not yet the Livadia Palace, but water pipes, statues and fountains have already appeared.
In 1860, the estate acquired a separate Department for the Royal family. It was from this moment that the changes began, turning the manor house and 5 peasant courtyards (and this is what Livadia looked like at that time) into a luxurious Palace. 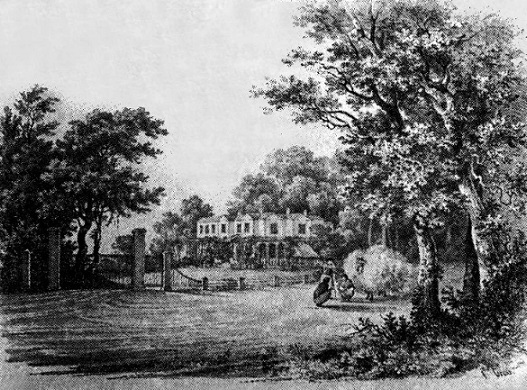 The history of the Livadia Palace preserves evidence of significant events related to the Russian autocrats. It was originally purchased for the Empress Maria Alexandrovna, who was shown the sea air to her sick lungs.
The reconstruction of the former owner's house began in 1861, when the Large and Small palaces, the Suite house and kitchen, as well as the Holy cross house Church were built according to the project of Hippolyte Monighetti. 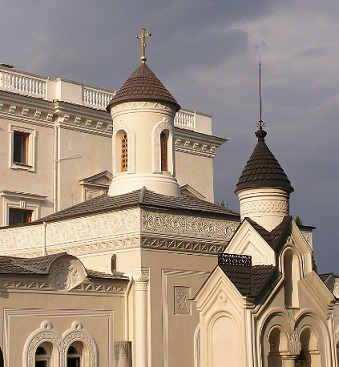 In the future, the fate of the Royal family was closely linked with the Livadia residence: in 1894, Emperor Alexander III died here, and in 1911, Nicholas II spent 4 million gold rubles on the construction of a new, White Palace. It is this structure in the light Italian style by the chief architect of Yalta Nikolai Krasnov that we have the pleasure to see today. It was built in just 17 months in the harsh conditions of the cholera epidemic. By the way, none of the 2.5 thousand workers fell ill, as all the builders lived in isolation, received medicines and timely disinfection. There is no information about such an actual mask regime in the context of today's pandemic. 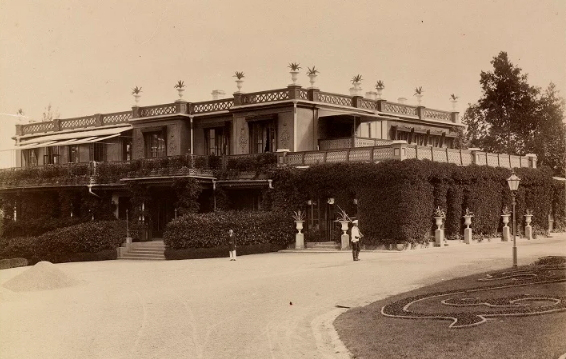 For the Romanovs, the Livadia Palace played the role of a summer residence, forming the personal property of the Imperial house. After the restoration, the Royal family visited here only 4 times. 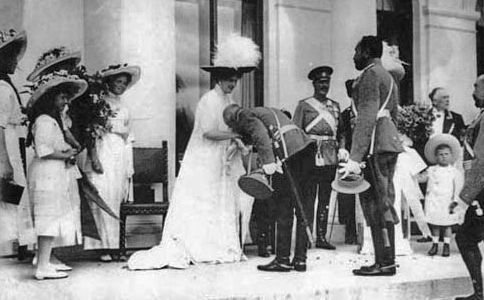 In the future, the Palace suffered the fate of all the iconic buildings of pre-revolutionary Russia. It was turned into the Sovnarkom 'office' of the Ministry of land and agriculture, and in 1918 it was plundered without hesitation by German troops who occupied the Ukrainian provinces and Crimea after the Soviet-German agreement on March 29, 1918. 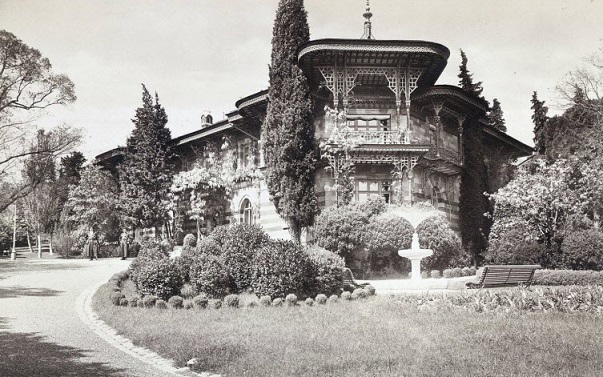 Soviet history turned the Livadia Palace into a sanatorium for peasants. According to The decree 'On the use of Crimea for the treatment of workers', more than 150 mansions, estates and private dachas of the South Caucasus were nationalized. In the Livadia Palace, hundreds of peasants were recovering their health 'from the plough', who at first did not really understand where they were sent, were timid and secretly cracked the lard and black bread they had brought with them, sitting on gilded chairs in the Royal dining room.
Since 1931, the Livadia health resort began to receive a wider range of tourists, being transformed into a 'climate plant for workers'. 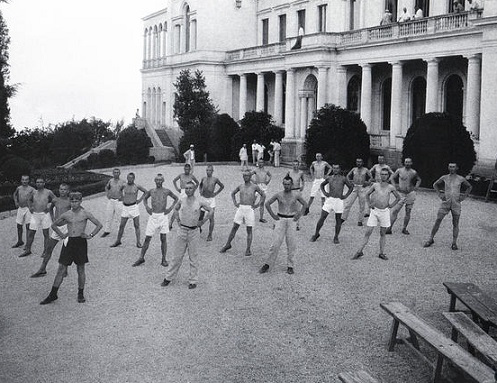 The square in front of the main entrance to the Livadia Palace is a silent witness to Grand historical events. Here in 1914,His Imperial Majesty welcomes the officers of the regiments stationed on the southern coast of the Crimea. In February 1945, the leaders of the leading countries, Stalin, Roosevelt and Churchill, sat here for a photo session after discussing the post-war world order. In February 2020, to mark the 75th anniversary of the Yalta conference, the Crimean post office issued a commemorative stamp depicting the monument to the 'Big three' by Zurab Tsereteli. The official cancellation took place at the Russian foreign Ministry. The monument itself is installed on the territory of the sanatorium 'Livadia' near the Livadia Palace. 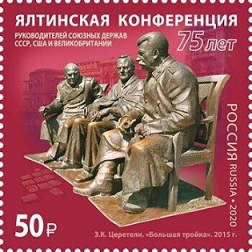 From 1953 to 1993, the Livadia Palace served as a sanatorium where the 'cream' of Soviet society rested. Today, the cultural monument is a Museum that is constantly open to visitors.
Thanks to the cinema, the Palace has become recognizable even by those who have never been to the Crimea. There were shooting such famous paintings as 'Anna Karenina' (1967), 'Othello' (1955), 'Dog in the manger' (1977), 'the return of the Resident'. 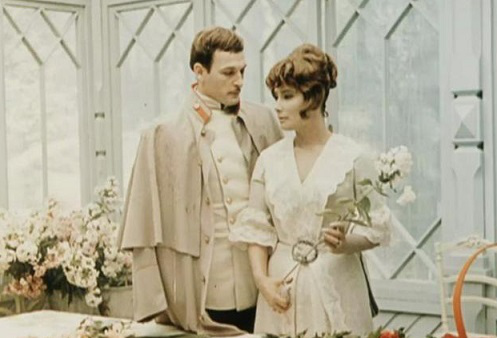 In the series 'architectural masterpieces of Russia' in 2015, the Bank of the Russian Federation issued a commemorative coin dedicated to the famous architect Nikolai Krasnov. His authorship belongs to the project of the Livadia Palace. The face value of the coin is 25 rubles, and the circulation is 1,500 copies. Thanks to the program HOBBYKEEPER ONLINE you can add to your collection coins, marks, postcards, banknotes, paintings even the rarest copies. Register personal account and always keep up to date with new products, add and edit material, having your favorite online collection at hand!
Translated by Yandex.Translator