history bonistics
What connection can there be between the district town of the Ryazan province and Prime Minister of great Britain Baroness Margaret Thatcher, who in this town has never been and hardly anything heard about it? Money, or rather banknotes, more precisely – the image on the banknotes.
The city of Kasimov, on the left Bank of the Oka, was founded already in 1152 by Prince Yuri Dolgoruky, the pre-laid Moscow in 1147 the current name he received long ago: in 1471 Duke of Moscow Vasily II the Dark gave the town fled from the hordes of the Tatar Khan of Qasim, presumably as payment for the betrayal.
Fast forward to the summer of 1917 in Petrograd, the Provisional government in Russia – the cash shortage that is particularly acute in the provincial wilderness. In Ryazan, Kasimov where the Treasury have always received paper money and specie, the provincial leaders were busy fighting for power and didn't pay attention to the repeated requests of Kasimova to fill the shortage of cash that threatened to paralyze economic ties with the city and County villages.
Personality, gain power in 1917, were usually people strong, on the ground – in particular. In Kasimov, these were:
the mayor N. Pieces;
the Chairman of the district Council I. Verzhbitsky;
the district Commissioner of the Provisional government V. Kachkov;
the Chairman of the Soviet of Workers 'and Soldiers' deputies I. Ragozin;
the Chairman of the Council of peasants ' deputies A. Polkanov.
Dual power in politics did not prevent the representatives of the Interim government and heads of local Councils quickly to take a unanimous decision to print in a local print shop own looking banknotes in denominations of 5 and 10 rubles, not as much as you want, and within the 'balance on current account of the city Council in the Treasury'.
Yes, promised in writing that all of this – briefly: bring up cash from Ryazan – Kasimov exchange bonds on the national money, and no later than September 1, 1917. And the people do not doubt – all 5 district chiefs together put their signatures on Kasimov bonds with indication of the positions.
Who came up with the design for this coin? According to eyewitnesses, the mayor of N. Pieces directly into the fateful meeting drew a sketch of a key element of which was the strap that encircles the denomination of the bill, virtually written off the order of the Garter, the highest chivalric order in the UK.
It is not excluded that the mayor was kept in mind the motto of the order of the Garter 'Honi soit qui mal y pense', which translates as 'shamed be the person who would think badly'. 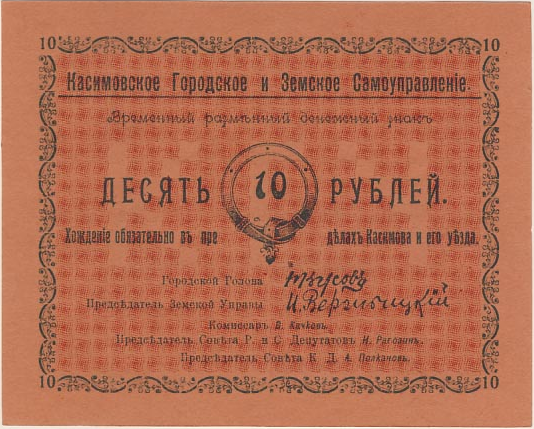 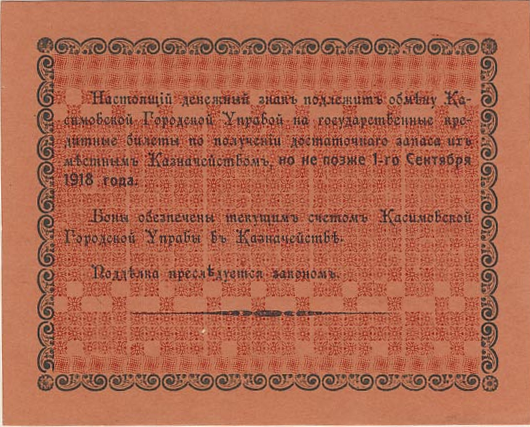 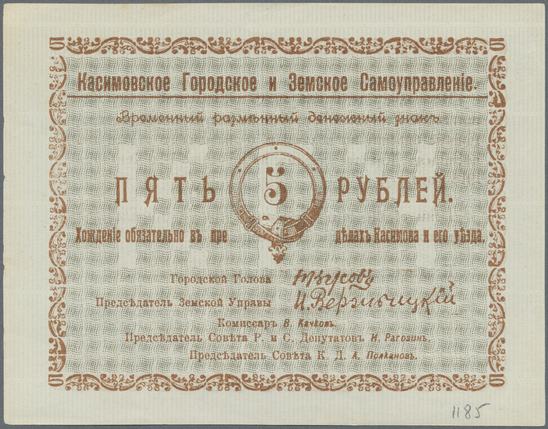 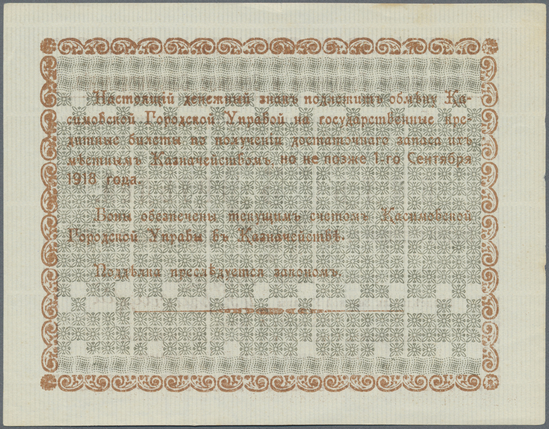 It so happened that Kasimova there was no need to think ill: the money to print in time, but that's only in Ryazan came around and cash in Kasimov still ride. All copies were hidden in the safe of the local Bank, and then transferred to the local Museum.
The Museum's leadership in the 1930-ies, we found the same use of banknotes with the elements of the order of the Garter: they were used as entrance tickets to the Kasimov Museum of local lore.
Given the fact that the government delegation, including a British delegation with a knight of the Garter Margaret Thatcher, not often visited this Museum, printed money-the tickets were not fully utilized. Therefore, the coin or banknote collector got in their collections of interesting banknotes, and is in excellent conservation.