numismatics
If at the time when Ostap Bender lived and worked, the Eastern calendar was as popular among the population of the country as it is today, his enterprise 'Horns and Hooves' would have been an absolutely stunning success. Bull, Sheep, Pig-all these pets today represent not only consumer nutritional value, but also can influence the adoption of vital decisions. To marry ‒ not to marry, to buy-not to buy, to be friends or to be offended-these and many other fateful steps today many do not dare to take without the consent of representatives of the solar and lunar fauna.
The year 2021 has arrived, bringing its own adjustments to the life of representatives of Homo Sapiens. So that 'real life does not fly by, happily trumpeting and flashing its lacquered wings', today many citizens resort to the help of psychics and all sorts of non-boring symbols. The place of honor in the first row is occupied, of course, by horned-hoofed mammals, even if they do not give milk, but they are directly related to this process, namely, bulls. 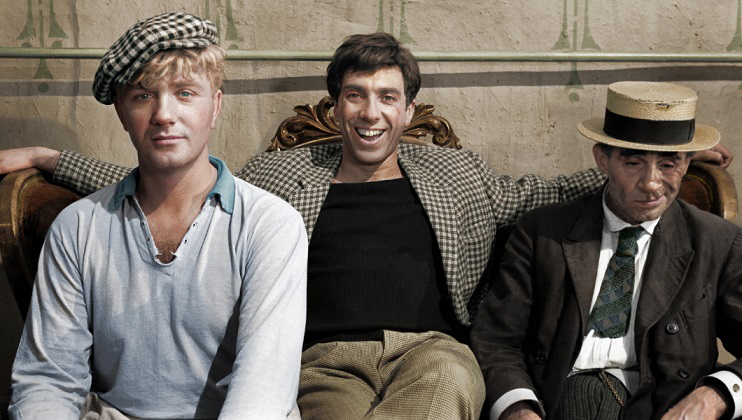 This year, hard work is especially honored ('Give me a million! Well, give me a million!'), perseverance ('Knock and it will be opened to you', the Bible from Matthew, Chapter 7), wise deliberation of decisions. The same properties that the symbol of the year has. Well, the fact that the Bull is white and metallic gives every reason to believe that much will have to start with a white sheet, and in achieving the 'dream come true' to show an iron will.
So, on the night of February 11-12, the New Year of the Bull came. In this regard, the Chinese are given a whole week off (long summers to Comrade Xi Jinping), while the rest of the world's population froze and tensed in anticipation of the promised benefits. Symbolism in this case plays an important role, since happiness, like a bull on a red rag, goes to where it is expected and met accordingly.
For numismatists, preparation can mean only one thing: to add to their collection coins with the image of the symbol of the year. Fortunately, there are plenty of them in the world ‒ because 'if there are banknotes roaming around in the country, then there must be people who have a lot of them'. 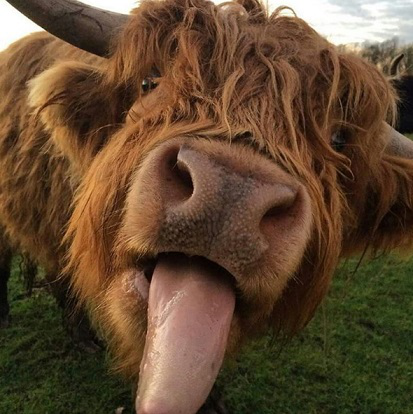 TOP RARE COINS DEDICATED TO THE YEAR OF THE BULL-2021

The birthplace of the Eastern calendar, China, surprised the world with a series of commemorative coins dedicated to the symbol of the year. It includes 9 gold and 6 silver coins, each of which has an original shape (not only a circle, but also a fan, a rectangle, and even a flower), the content of gold is from 3 to 10 kilograms (!), and silver ‒ from 30 grams to 1 kilogram. Unique gold giants have a limited edition of 18 pieces. The nominal value of each is 100 thousand yuan. 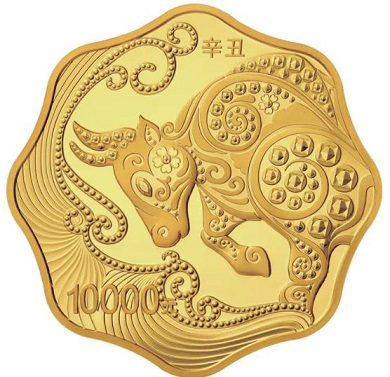 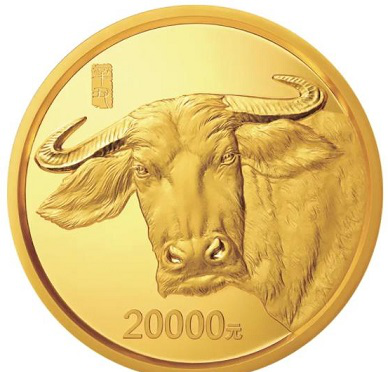 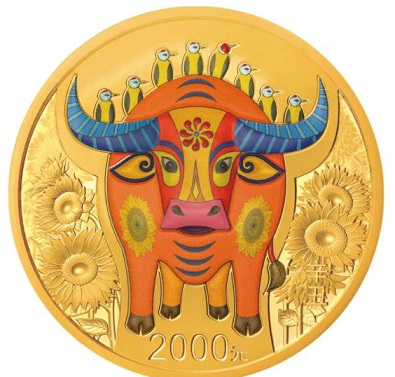 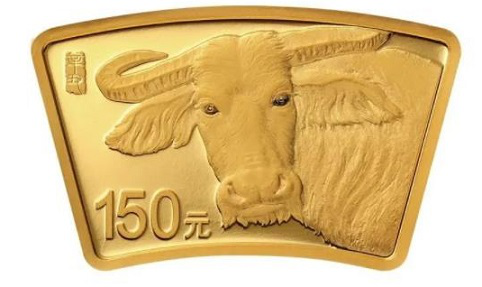 The oldest monarchy (as you know, England was assembled into a single kingdom already in the 10th century) has got old and for the first time in the history of Russian numismatics dedicated a series of collectible gold coins to the horned symbol of the year. Four luxury coins with the common name YEAR OF THE OX were minted at the British Royal Mint in September 2020. The minimum weight of the smallest copy is 7.8 grams (398 pieces), followed by 898 coins weighing 31.21 grams and 30 coins weighing 156.295 grams.
The decoration of the series is 10 unique copies, the weight of which is equal to 1 005 grams of pure gold.
On the obverse, as usual, there is a portrait of the Queen performed by the famous sculptor Jody Clark. The reverse is decorated with the same horned herbivore, depicted by the artist Harry Brockway at a meal. The Pacific state of Niue is famous for its top coin issues. This item of income plays an important role in replenishing the state budget of the country.
This time, a ringing reputation did not let down the experts of numismatics from the central bank of New Zealand, where a silver investment coin with a face value of 2 NZD was issued at the Mint in 2021. The precious metal has a 999-th sample, the weight of the coin is 1 ounce (this is evidenced by the corresponding inscription on the obverse), the circulation is 3 thousand copies. The reverse is traditionally decorated with the image of the Queen of Great Britain. 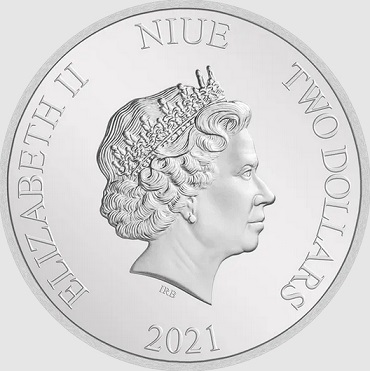 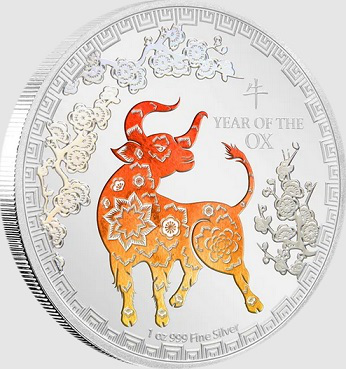 By the way, the 'bullish' theme is not new to Niue. In 2008, Poland minted 12 thousand commemorative commemorative coins with the image of a Bull for the island state. The horned one on the reverse is depicted in a very homely pose: he is lying down in a meadow and is going to dine on blue flowers. 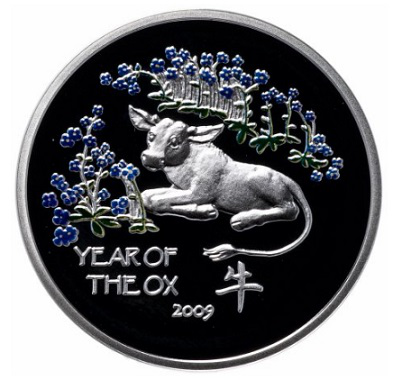 The original and certainly unique design is presented on the Mongolian silver coin, with a face value of 1000 tugriks. It is dedicated to all those born in the year of the Bull and is a stylized antique figurine of a bull, made with the help of 'Smartminting' technology. And the worldwide circulation is only 999 copies - a rare pleasure. 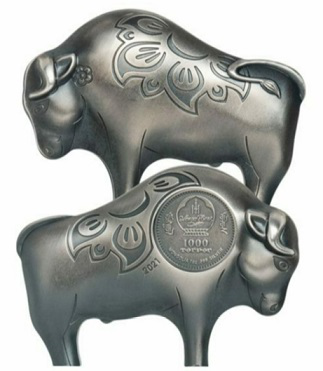 In the series, which is called ‒ 'Eastern Calendar' - The National Bank of Kazakhstan issued two commemorative coins - gold and silver. Their nominal value is 500 tenge, and the design is based on the eponymous sculptural composition decorating the center of Almaty. The obverse of the coins is lavishly decorated with images of mythological symbols and constellations, and on the reverse is a fabulous Bull. Only 800 gold coins were issued, and 2 thousand silver coins were issued. In Bender's words, 'the golden calf in our country still has some power,' as evidenced by the growing interest of citizens in collecting banknotes. And not just for the sake of aesthetics.
'Take off your hats. Bare your heads' - specially created for collectors program HOBBYKEEPER ONLINE. Organize the catalog coins, brands, postcards, banknotes, pictures, keep up-to-date records of transactions, add any digitized copies and related information about them with Hobby Keeper is easy and simple. Access to your favorite archive is possible both from a PC and from any mobile device thanks to the adapted version of programs.
The ice has broken, and the inaccessible will become accessible, and the impossible will become possible together with the Keeper Hobby!
Translated by Yandex.Translator