philocartia history
Thinking about the events of world history that took place in the twentieth century, you come to confusion and horror from the number of lives lost by wars. First ‒ the carnage of the First World War, after-the bloody horrors of Nazism... Millions of crippled destinies and human suffering on a universal scale-this is the' legacy ' with which humanity entered the twenty-first century.
History does not know the subjunctive mood. This is a fact. But still, you can't help but wonder what would have happened if a boy named Adolf had not appeared among the earthlings in April 1889 in the Austrian town of Braunau am Inn? If Hitler had been living in a completely different time, in a different country ‒ would he have become the monster who made his diabolical rise, or could history have developed differently? .. 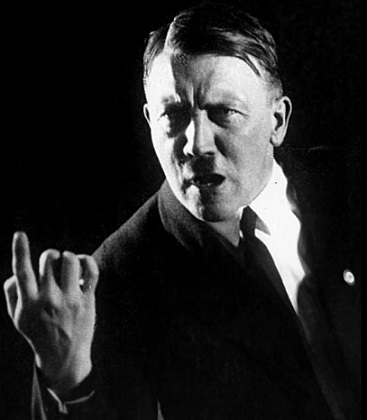 To date, the reasons for the emergence of the ideology of fascism have been analyzed and studied in detail. It is based on a pseudo-theory of racial exclusivity, reactionary intolerance, and aggression against political opponents, and was implemented through mass terror.
Behind these vague formulations are actually hundreds of thousands of human lives, whose course was interrupted by the will of the 'active minority'who came to power. In fact, it was a fascist elite that imposed its vision of the world on millions of fellow citizens, turning them into their accomplices or victims. 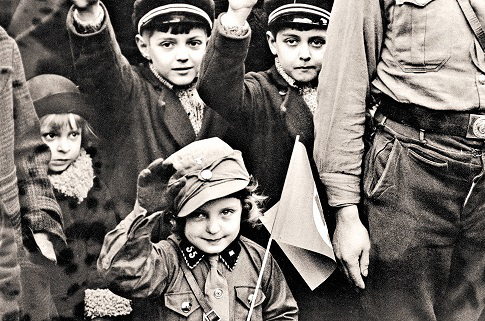 What a monster you have to be to consider humanity-stupidity, and inspire the soldiers of the Wehrmacht 'to destroy pity and compassion in yourself, to kill everyone without stopping ‒ an old man in front of you, a woman, a girl or a boy'!
Against this background, the manifestations of some of the Fuhrer's tender feelings, which are expressed, for example, in his paintings or Christmas messages, look inhumanly creepy. These artifacts occupy a prominent place in the archives of history connoisseurs, emphasizing the unreal cynicism of the fascist ideology, covered by the high ideals of the 'struggle for the happiness of the German nation'.
It turns out that Hitler also had his sympathies and celebrated Christmas. The proof of this is a Christmas card signed by the Fuhrer (when he was not yet 'leader of the nation') around 1925.
Interestingly, the paper on the postcard size of 14 by 8 cm is very expensive, handmade. On the title page is printed in gold lettering 'Merry Christmas!'. Hitler wrote his signature in black ink in the lower-right corner. 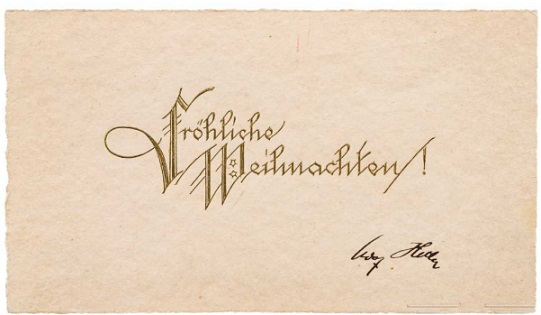 It was addressed to a certain Margaret Bauderer, to whom a year later he addressed himself more intimately ‒ Greta. This is how Hitler wrote on the edition of his fundamental work 'My Struggle', which was signed for this unknown lady.
On the cover of the second volume there is a dedication to Frau Grete Boderer, which was presented to her in 1927 in Munich. Today, the heirs put up for auction a well-preserved edition, adding a postcard to it as well. 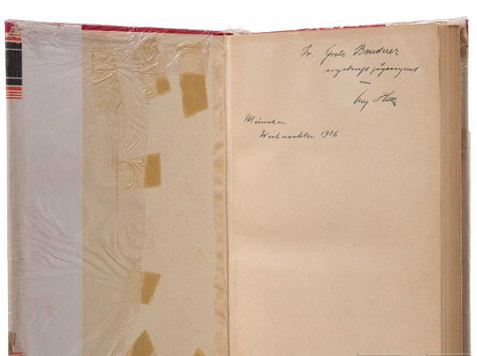 Such sentimental tides were characteristic of the Fuhrer not only during the Christmas holidays. In 2017, a card with a portrait and signature of the German dictator was put up for auction in the English county of Shropshire.
It is addressed to a member of the Waffen-SS, Ellenbeck. According to the addressee himself, by the way, who happily lived to 99 years and died already in 2011, he became close to Hitler on the basis of dog breeding. He was a fan of his shepherd, Blondie, with whom he took a photo as a souvenir.
The Fuhrer narcissistically called himself 'Mr. Wolf', as evidenced by his own signature on the photo. 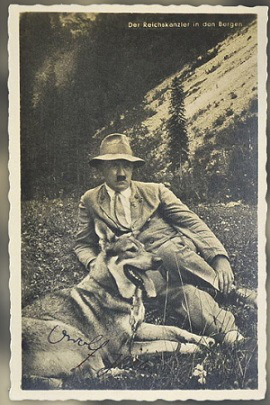 As for other aesthetic impulses of Adolf Hitler, historians count about 3,400 copies of his works: paintings, watercolors, sketches and pencil sketches. At first, from 1908 to 1914, the use of a brush helped him survive when, after squandering a small inheritance from his mother, Hitler starved in Vienna. He drew and sold postcards and paintings, which are now highly valued at auctions.
However, this love of the beautiful did not prevent the Fuhrer from considering the intelligentsia 'scum of society', giving orders to burn books 'hostile' to National Socialism, organizing the SS, SD and Gestapo, destroying the 'enemies of the nation' on the physical level...
The sentimental messages on postcards and the watercolor daub of the man who organized the extermination of millions of people who threw humanity into the furnace of the Second World War look wild and godless, like the tears of a crocodile. 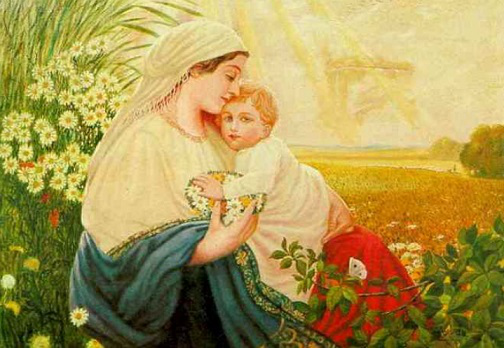 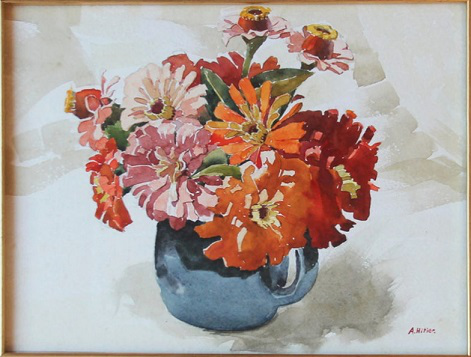 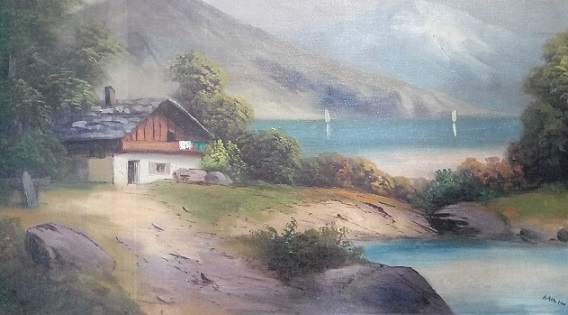 'In the face of a great goal, no sacrifice will seem too great' - said the founder of national socialism, preparing to win and 'become one of the greatest in history', or to lose and be 'condemned, rejected and cursed'. At the same time, he believed that the fate of the German people should follow his own.
Does history teach you nothing?! Today, no matter how terrible, fascism rears its head again, and now the supporters of national socialism are 'zig-zag' in many cities around the world. If common sense does not prevail, no one can save humanity from a new massacre. After all, without understanding the destructive essence and without appreciating the deadly danger, the ideas of fascism can seem so attractive...
THE CRIMES OF NAZISM ARE NOT SUBJECT TO ANY JUSTIFICATION AND HAVE NO STATUTE OF LIMITATIONS. 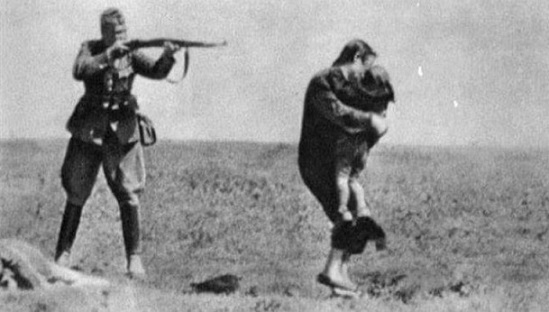 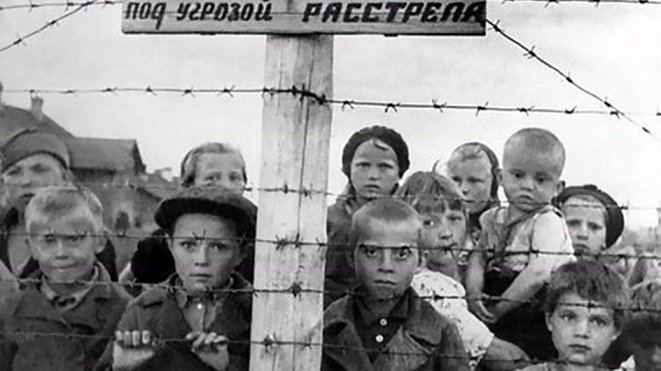 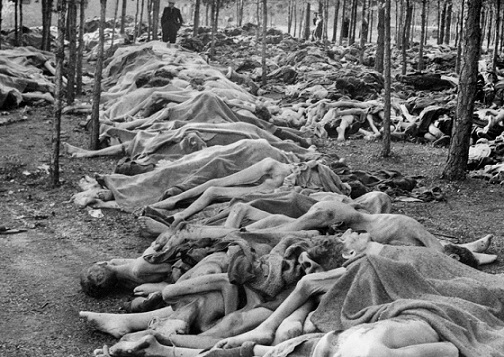 Save the memory of historical events by creating a thematic online collection postcards, banknotes, pictures, coins, marks with the program HOBBYKEEPER ONLINE. The sophisticated functionality allows you to organize and keep accurate records of the collection material, add descriptions, edit and generate links, as well as process images using the built-in editor. You will have access to your online archive from any mobile device and from anywhere in the world thanks to the adapted version of programs.
Join us, and the impossible will become possible, and the inaccessible will become available together with Hobby Keeper!
Translated by Yandex.Translator