ACE in the hole

numismatics philately personality
Unmatched, mysterious, phenomenal Harry Houdini remained for many inexplicable mystery. His talent illusionist turned on the head of the representation of thousands of spectators on the usual physical properties are well known items. Magic illusion, which was created as a result of hard work and constant training, seemed magic, from the category of supernatural. Like Houdini possessed superhuman abilities, the 'ACE in the hole', which gave him the advantage over mere mortals. 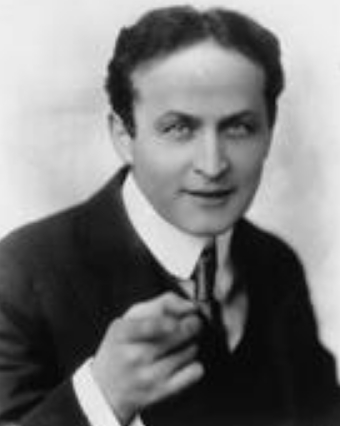 In fact, no magic, no spiritual abilities of Harry Houdini did not possess. And the real name of the magician does not like what was written thousands of screaming billboards.
As a young boy, Eric Weiss (this name was given to Houdini at birth) was fond of tricks. In Appleton, where in 1878 the family lived Vaisov, often called a troupe of wandering artists. The boy surprised looking at trained dogs, and laughed to stupor with ridiculous clowns. But the real delight he called magicians who were able to get a pigeon out of a hat or spice up the still cane. 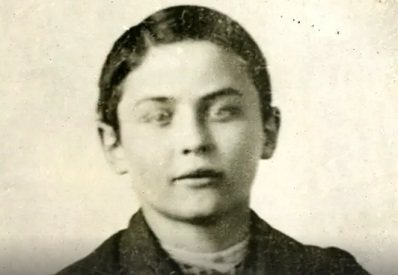 Soon he decided to try his hand, revealing a Jack Hepler, head of a visiting circus troupe, the talent. Among the carefully copied rooms boy and presented your own, which is called the praise of a professional. Being suspended by his feet, Houdini managed to collect scattered on the floor needles with eyelids and eyelashes.
In General, anything supernatural, will tell the audience. And, because room-based illusionist - the hard work and Herculean work. He learned to hold his breath up to three minutes (!), to inflate and blow off the muscles that made his joints are extremely flexible and mobile. All this combined with a sharp mind and observation allowed Houdini to achieve unbelievable creative heights, becoming a living legend, an object of admiration and envy. 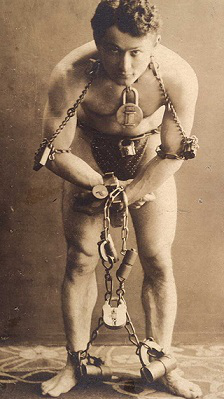 In 2002, the U.S. post office issued a commemorative hitch, dedicated to the great illusionist. On it the artist depicted a smiling mysteriously, as he was known and loved by thousands of fans. Face value of a stamp is 37 cents. 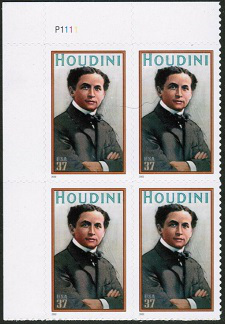 But the postal service went much further - because the brand has been dedicated to the master of illusion, the image is not limited to the simple portrait of a celebrity. Using a special decoder right next to the portrait of Houdini in coat can be seen the image of his 'prepared' - fettered in chains and prepared to show off your favourite trick. 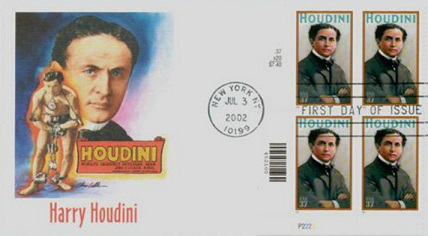 Houdini gained fame as a sorcerer and magician. However, his attitude to spiritualistic charlatans, deception rook from gullible spectators, was sharply negative. Houdini had visited incognito the similar views and to expose fraud than to have made a lot of enemies. Among the former friends of the illusionist - the famous English writer Arthur Conan Doyle. Incredibly, the Creator of the brilliant detective, was passionately fond of spiritualism, and perceived ridicule from Houdini as a personal insult. 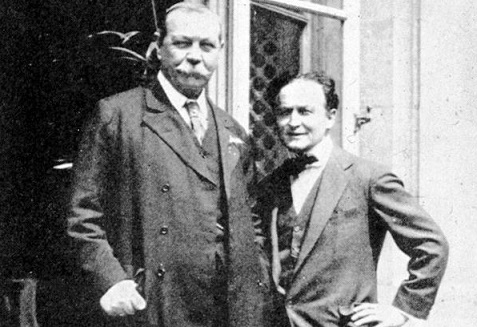 Its the art of the illusionist has perfected. The secret of many of his tricks and to this day remains unsolved. In the memory of many of his famous liberation from the shackles, when Houdini was locked in the Chicago city jail. This trick he had done many times and in different places, and the number of locks increased, but their complexity increased. 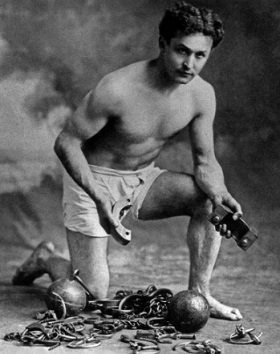 Famous illusionist commemorative silver coin minted in the Republic of Palau in 2011. Circulation is the year of the death of Houdini in 1926 copies. The reverse depicts the magician and his magic hat. It is clear that the coin is not simple, but with a mystery. It is Packed in the original box from which she disappears, then appears again. The secret trick You can learn easily. 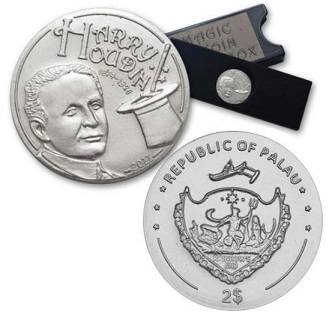 Was in the life of Harry Houdini and true love. Their relationship with Beatrice Rahner-Bess began quite unexpectedly, she met Houdini as the bride of his brother, Theodore. However, not resist the magnetism of Harry, soon she began to assist Houdini in the status of his wife. After his mother, Cecilia Steiner, she was the second in the world the woman magician idolized.
They say that Houdini's wife never quarreled. To release the couples helped them a whole system of symbols, which helped to avoid escalation of the quarrel. For example, Harry was angry at his wife three times he raised the right eyebrow. A good way to end the skirmish developing into a scandal. 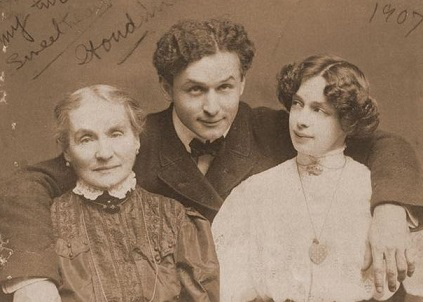 Despite the dangerous stunts that he performed Houdini, the life of an artist gone corny. He inflamed Appendix. To provoke disease could blows in the stomach of a student-boxer who wanted to test the strength of a press celebrity, however, there is a version about poisoning. The true cause of death will remain forever hidden, as the life of Harry Houdini - illusionist, athlete, philanthropist and Bon vivant. 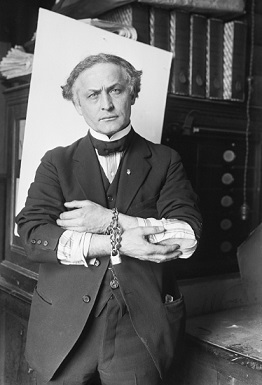 If You are also kind to his collection, as Houdini the secrets of their tricks, the program HOBBYKEEPER ONLINE will help to save and multiply Your coins, stamps, postcards, banknotes and paintings. Create a personal account and digitize copies of your files. Now keep a record and look at the collection You can, even while away from the PC. This will help mobile applications for philatelists, coin collectors, paper money collectors, deltiologists and collectors of painting.
Hobby Keeper - bring your favorite collection!
Translated by Yandex.Translator